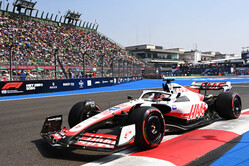 Haas F1 Team drivers Kevin Magnussen and Mick Schumacher qualified 15th and 16th respectively for the Mexico City Grand Prix, Round 20 of the 2022 FIA Formula 1 World Championship. After grid penalties are applied to both Magnussen and Lance Stroll (Aston Martin) - the only two drivers carrying penalties into qualifying, Schumacher moves up to 15th while Magnussen will drop to 19th for Sunday's 71-lap race.

Qualifying started with Q1's opening knockout session and it was a tale of frustration for Schumacher. Building speed throughout the session, the German's fastest lap of 1:19.695 - coming on his second set of Pirelli P Zero Red softs, was ultimately deleted for exceeding track limits at Turn 2. That time would have secured his place comfortably in Q2 but instead his follow-up lap of 1:20.419 was the one that counted - leaving Schumacher 16th and out of qualifying.

Magnussen fared better with a fast lap of 1:20.293, also on his second set of fresh softs, propelling the Dane into Q2 in 15th overall. A used set of softs was bolted onto his VF-22 to start Q2 before another new set of the Reds went on to gun for a fast lap. Magnussen recorded a 1:19.833 on his last charge to exit Q2 in 15th overall.

Kevin Magnussen: "We've obviously had a bit of a tough weekend with FP1 and then with the test tires which you have to use in FP2, so I got very little running, but I actually think we were alright considering everything. We changed the front wing, rear wing and floor from FP3 to qualifying but the aero balance changed completely and we were completely off so we had to correct it, but we got through to Q2 which was good. This qualifying didn't matter as much because of the five-place grid penalty, so we'll start near the back but let's see what we're able to do."

Mick Schumacher: "My first lap got deleted which was enough for P7 at the time, so it would've been fine to get into Q2. The pace is there, and we couldn't quite use it today as the track limits were the main factor. It's unfortunate because we were on for a good qualifying which would've made tomorrow a lot easier, but we've managed in the past to go from the back to the front so I'm hopeful."

Guenther Steiner, Team Principal: "The good thing is that for the first time we made it into Q2 in Mexico. Now, with the penalty, Kevin needs to start from P19 which is not fantastic, but I think Mick showed what the car is capable of in his second run in Q1, on his first lap. He had a time that would've put him comfortably into the top 10. He was off the track limits, which didn't give him an advantage, but you know, we were over it and you get your time deleted. On his second lap, on the same set of tires, he couldn't recover because the tire wasn't there anymore. It's disappointing to end up like this but for tomorrow I think the car has got good pace in it and hopefully we can make some positions up like we did in Austin."

Check out our Saturday gallery from Mexico City here.