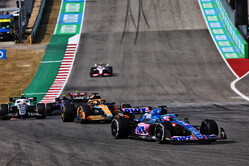 A hearing on Thursday will decide whether Alpine has the right to appeal the penalty meted out to the team on Sunday which dropped Fernando Alonso from 7th to 15th.

Representatives of both the French team and Haas have been summoned to take part in a video conference at 18:00 (Mexico time) on Thursday, to determine the admissibility, or otherwise, of the protest lodged on Sunday by Alpine against the stewards decision following the protest lodged by Haas.

Should the protest lodged by Alpine be deemed admissible, a separate hearing of the protest will be convened and all parties will be advised on the time and date.

In the aftermath of Sunday's United States Grand Prix, Haas protested the cars of Sergio Perez and Alonso claiming that they were both allowed to continue racing in an unsafe condition.

While the protest of the Red Bull was thrown out, that of the Alpine was upheld and the 10s time penalty imposed became 30s as the race was over, thereby dropping the two-time world champion from 7th to 15th.

Over the course of the season, Hass has had its drivers shown the orange and black flag - which demands the driver pits immediately as his car is in an unsafe condition - on three occasions, costing the American outfit valuable points, and was clearly unhappy that on Sunday two drivers appeared to get away with it.

Following the penalty, Alpine announced that it would appeal the decision, insisting that the team "acted fairly and deemed the car remained structurally safe" following Alonso's clash with Lance Stroll which resulted in "with the right-side rear view wing mirror detaching from the chassis as a result".

"The FIA has the right to black and orange flag a car during the race if they consider it unsafe," declared the French team, "and, on this occasion, they assessed the car and decided not to action the flag. Moreover, after the race, the FIA technical delegate considered the car legal.

The team also believes that due to the protest being lodged 24 minutes past the specified deadline, it should not have been accepted and therefore the penalty should be considered as invalid.

Taking to social media, Alonso declared Thursday an important day for the sport.

"It's one of those rare times in sport, that I feel we are all on the same page," said the Spaniard, "and share the same opinion towards rules and regulations.

"Therefore, Thursday is an important day for the sport that we love so much, as this decision will dictate if we are going in the right direction for the future."

Ignoring Haas failure to lodge its protest in time, it's worth noting that during FP2, it was the Spaniard himself who pointed out the value of mirrors - such as they are - in F1.

"Hamilton has no mirrors today," he complained after being impeded by Lewis Hamilton. "Unbelievable."

Furthermore, better use of his mirrors, among other things, might have seen Lance Stroll avoid the horrific clash that was to cause Alonso to lose his mirror in the first place.