Sport organisers and regulators only motivated by money and power... says Ferrari chairman 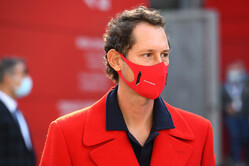 Ferrari chairman, John Elkann, believes that sport organisers and regulators are only motivated by money and power.

As has been previously reported, the Italian-American spoke of his hopes for Ferrari - a title by 2026 - the team's driver pairing - the strongest on the grid - and his faith in Mattia Binotto - though there are too many mistakes.

However, as he spoke about other matters, such as Juventas, Ferrari's entry in Hypercars, the first electric Ferrari and Italian sport in general, there was one little gem that warranted re-reading... and then re-reading again.

"I'm worried about what's going on around football and professional sports in general," said Elkann. "At the heart of the system should be the fans, the athletes and the teams.

"But there is a dangerous drift which works in favour of the middlemen," he continued, "the organisers and regulators who are putting the world of sport in a difficult position because the only thing that motivates them is money and power."

This from the chairman of a team which not only has the power of veto over F1's regulations, but also picks up more in prize money than the championship winners.

While the current FIA president has no ties to Ferrari, unlike his predecessor Jean Todt, who spent 16 years with the Maranello outfit, two of the most senior officials at F1, CEO Stefano Domenicali and MD Ross Brawn, both enjoyed success at the Scuderia.