Engine rules leave us all paying the penalty 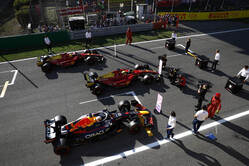 In the quest to introduce random elements of chance to grands prix, Ross Brawn and his team appear to have hit the motherlode.

In the aftermath of yesterday's qualifying session, TV pundits, the media, team bosses and drivers all appeared equally baffled as to the grid order for today's Italian Grand Prix.

With nine drivers hit with grid penalties, the only driver starting the race from the same position in which they qualified is pole-man, Charles Leclerc.

Such was the confusion, the FIA, the sport's governing body, they who came up with the rules, wasn't able to issue a provisional grid until 20:45, almost four hours after Q3 ended... and even then a "corrected" version was issued ten minutes later.

Having failed with the push for reverse grids, in a bid to introduce random elements of chance on Sunday afternoons, Ross Brawn and his team finally appear to have hit the motherlode.

"Can someone tell me in which position I will start tomorrow's race?" tweeted Pierre Gasly.

"For a moment he said 10th, and then he said someone's got a penalty, or someone got a lap deleted, so now you're ninth," said Daniel Ricciardo. "And then he goes another one, so now you're eighth. It just got better.

"What he told me was fifth but now what the rest of the team tells me is fourth," he added. "So yeah, not sure."

The reigning world champion, and mostly likely 2022 winner, starts from seventh, sandwiched between a rookie and one of the hardest fighters on the grid, while the team which pulled off the shock of the season here twelve months ago fills the second row.

With such a mixed-up grid, on a circuit where overtaking is difficult, DRS trains are inevitable, as Lewis Hamilton admits.

"I'm imagining everyone's going to be in a DRS train and it's just going to be sitting there and waiting for strategy and tyre degradation and those sorts," said the Mercedes driver after Q3.

"It's a one-stop easy, generally," he added, "so strategy won't do too much. I just hope that there's safety cars and all those sorts of things.

"I was thinking of taking my iPad with me in the race and when I'm in the DRS line just watch the new Game of Thrones," he grinned.

While we understand the need to restrict components as part of the curb on spending there have to be a better way than this.

After all , it's not even entirely random, what with teams strategically choosing when and where to introduce new components, opting for those tracks, a la Spa and Monza, where overtaking is possible, as opposed to Singapore and Suzuka.

Two of the last three races have been affected by these lotteries and there is every likelihood it will happen again in Austin.

Much is made of the success of Drive to Drive in winning over new fans, especially in the US, but should there be a repeat next month at COTA how does F1 explain to those new fans that their hero doesn't really start from the second row but the ninth because he took on a new MGU-H and MGU-K.

Be it penalties involving championship points or money, there has to be a more 'fan friendly' means of enforcing the engine rules... for at present it is the fans who are paying the penalty.