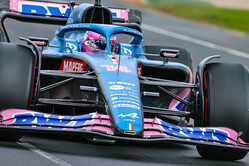 The team begins the second part of the 2022 FIA Formula 1 World Championship season sitting in fourth place in the Constructors' Championship. The season heads to Spa-Francorchamps for the Belgian Grand Prix this weekend, the first of three European races in as many weeks. Team Principal Otmar Szafnauer outlines the team's mindset heading into the triple header.

How ready is the team to take on the second part of the season?
Otmar Szafnauer: We are all feeling re-energised after the enforced Formula 1 summer shutdown. It's always a good time to take stock on the season so far, reflect on the positives and assess some of the areas for improvement. Now, we are all feeling ready and motivated for the second part of the season where there is so much to play for in terms of the championship. We left Budapest at the end of July in fourth place in the Constructors' Championship and our aim is simple: we want to be in the same position at the end of the season finale in Abu Dhabi.

What is the latest within the team?
OS: Clearly the team has been quite prominent in the world media in the days after Hungary and just before the summer break, however, it is absolutely no distraction for us once we hit the race track again. While we're losing a fantastic asset in Fernando for next year, his decision has zero bearing on what we want to achieve together in 2022. We'll be pushing hard as a team - with both Fernando and Esteban in the car for the remainder of the year - in order to put ourselves in the best possible position to meet the aforementioned targets for this championship season. I know both drivers are highly motivated so we're all looking forward to channeling that energy on track.

Are you looking forward to racing at the legendary Spa-Francorchamps?
OS: This segment of the calendar is probably the toughest and most enduring part of the season as we round off racing in Europe with a busy triple header. That said, we race on three iconic and legendary race circuits, which definitely have their place in Formula 1. Spa-Francorchamps is a fantastic venue with teams and drivers alike always looking forward to race there. There are some small on-track changes for safety at Spa this year, which will be interesting to assess. It's normally a place where we see some variations in the weather, so we'll have to be alert to all conditions. Whatever happens, rain or shine, as a team our mindset is clear: we'll work hard together to achieve the best possible results.

Esteban Ocon returns to Spa-Francorchamps, a circuit where he made his Formula 1 debut six years ago. Already up on his season tally from this time last year, Esteban will be looking to carry his current form into the remaining nine rounds of the Championship.

How was your summer break Esteban?
Esteban Ocon: "It was good, I spent some time in Sardinia, relaxing and recharging after what was an intense first part of the season. It was a much-needed break for everyone but I know we are all excited to be racing again. I came back home with plenty of time and started preparations for Spa early to be ready for the weekend and the rest of the upcoming triple-header. We've also been in the simulator this week undergoing the usual preparations and I know the team are raring to go."

Belgium up first. What are your thoughts on this iconic track?
EO: "Spa is a place that I know most drivers really enjoy driving at, including myself. It's even more special for me as it is where I made my Formula 1 debut in 2016. It was a moment I'll never forget, a moment where a dream came true. In terms of performance, there's been some good results in the past like when I qualified third in 2018 and when we finished fourth and fifth in the race in 2020. It's also the track where we also lost Anthoine a few years back. We are always racing with him in our thoughts and I still personally think about him every day."

How do you approach driving around Spa-Francorchamps?
EO: "This circuit is definitely part of one of those legendary motorsport tracks. It's a great place where you can just feel the history around you all of the time. There are of course some amazing corners which are always a pleasure to drive on especially in a modern Formula 1 car. These include the likes of Raidillon, Pouhon and Blanchimont, and it will also very cool to take Eau Rouge flat in these modern F1 cars. We also find some long straights and plenty of elevation change on this track which makes for an enjoyable lap where you can find a bit of everything. Overtaking is common in Spa and we know the weather is often mixed, usually resulting in an exciting race. But let's maybe hope for a bit less rain than last year this time!"

Fresh from his summer break, Fernando Alonso heads to Belgium for what will be his seventeenth Formula 1 Grand Prix at the famous racing venue at Spa-Francorchamps. The Spaniard will look to pick-up where he left off in July and depart Belgium with a ninth points-finish in a row.

In such a busy calendar year of racing, what do you do during a summer shutdown?
Fernando Alonso: "We all miss racing in August but the time off to recharge the batteries is needed. After 20 years of racing at the pinnacle of motorsports, I have learnt that taking some time to recover is very important, especially during such a hectic year. Now that we have more than 20 races in a season, it's even more important to make sure you maximise your recovery time. But it's important to keep some exercise routine, as once we get back to racing it's relentless until December."

Do you enjoy racing at Spa-Francorchamps?
FA: "I do enjoy racing at Spa. It's one of the most historic races on the calendar. We usually have interesting races there as the circuit lends itself to lots of overtaking opportunities. The weather is always mixed there too, so there can be a few surprises. We wouldn't mind some rain this weekend as the car performs quite well in these conditions. We want to put on a show for the fans especially after last year!"

What are your targets for the rest of the season?
FA: "I want to enjoy the rest of this season with Alpine after a strong first half of the year. There is still much we can achieve together, and I'll be pushing hard until the last race in Abu Dhabi. Our aim is to finish fourth in the Constructors, and I think we'll be in for a tight battle with McLaren for the remainder of the season. We showed strong development in the first half of the year and consistently outscored our nearest on-track rivals in the last few races. We have to keep up this strong development rate from both factories if we are to maintain our position."