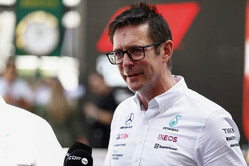 While Red Bull, Ferrari and Mercedes argue over the legality of the 2023 regulation change relating to bouncing, rivals are more concerned over the timing of the move.

Feeling that the change is merely to aid Mercedes, Red Bull and Ferrari are dismissing the claim that the FIA is forcing the issue through on safety grounds.

However, between rivals the difference of opinion is mainly relating to the late timing of the change, and added costs involved, considering that most are already well underway with their work on their 2023 contenders.

"We're very supportive of this," said (Mercedes-powered) McLaren's James Key of the change. "I don't think you can row-back on a safety issue.

"I know there's a bit of concern from some teams," he added. "As a team that hasn't particularly suffered from porpoising, we're still in favour of it, because we think it's the right thing to do.

"So, I think we've the sorts of things that have been proposed, they're big enough to have to put fresh research on to it. Not everything is going to carry-over in terms of your aerodynamic knowledge: there will be a few impacts on packaging, and that sort of thing but I don't... personally, I don't see it as a radical change enough to where you've got to step back and think: we've got to re-lay on the car out now because, all of these things require something different.

"So, I think there's going to be a similar thread to what we've learned this year. But there will be a bit of fresh research based on things that we've already established. Floor height, for example, if that changes, it's going to be broadly the same floor - just a bit higher. So 'what does that mean for us', rather than something totally unfamiliar."

"From our side in general, we were welcoming the effort of the FIA to improve, in general the safety," admitted (Ferrari-powered) Alfa Romeo's Jan Monchaux. "But we are questioning this particular topic.

"We'll follow what the FIA will finally decide," he admitted. "So we haven't really started effectively to put resource on it, because our discussions are in the background.

"It's not going to be a departure," he insisted. "The issue, as the technical directors see it, is that you will have to spend resources you potentially didn't want to, or didn't plan to put on this, because even if it's not a departure, let's call it a blank sheet of paper. You will have to spend more effort, make sure you're not missing anything, because 25mm, if it's really 25mm will play a role.

"So that's the thing that is more, for the technical director, painful - because we are also working with the cost cap.

"We have a vision, how strategically to approach the development over the next few years. And it's quite evident, we need some firm stability in the rules. Because if every six months, we are changing the boundary constraint, it just makes our life quite complicated and to be able to roll-out the strategy we have, which is linked to the budget cap as well... the ex-aerodynamicist I am is not too worried about that change. If it comes, it's something we'll get on top of- it just requires extra resource, which potentially we would spend on something else.

"I would prefer those changes would be for '24," admitted Monchaux. "But if it comes for '23 I think now, just before the shutdown is kind-of the latest, that is acceptable. Because after the shut-down, most of the teams will be flat-out on their '23 car development and such an intrusive change would upset a lot of development plans, I suppose. So, it's just about right - but if we could have no change, we would prefer it."

"I think this is about as late as you'd want to get," added Key. "There are long lead times, gearboxes, for example, that sort of thing, which begin to mature quite heavily at this time of year and anything around that area, of course, the throat height is part of that, or any implications of the aerodynamics, which suggests that your suspension should be laid out slightly differently, and that sort of thing, it's pretty late to be understanding that.

"So yeah, the sooner we know the final numbers, the better. When you'd really like to know, with this sort of thing, I guess something of this magnitude, probably something like April or something like that is when you can begin to factor it into your earlier plans for a new car. But I guess that was probably too early to really know where this porpoising phenomenon was heading given that, you know, some cars were really suffering from it other others a lot less so at that point. But, yeah, I think I think the sooner the better, such that we can crack on with it."

"In Formula 1 you never actually draw a line," said Mercedes Andrew Shovlin, when asked where teams draw the line on development of their current car and switch focus to the following season. "It's a gradual blend of resource into W13 drifting downwards and 14 drifting up.

"We're going to need some clarity on the regulations," he admitted, "whether they're going to change before you'd make a really big shift.

"But every team will have started some work on next year. The difference for us was the early part of the year was very tough, it wasn't making a lot of sense and it was really firefighting.

"We're just starting to get to a stage now where we can get back to what we would call the business-as-usual development. And that's actually quite exciting."

"What we would like is clarity," he said again, "are they going to change, if so let's get on with it and agree it?

"Our stance with the FIA has always been that ... we know as a team, we need to fix our problems ourselves and we set that as an objective from day one and we're pretty confident that we can achieve that objective. So that's why I said for us, the big thing is we just want clarity on it.

"But the reality is that these cars will always run close to the ground, they'll always be banging on the road and whilst you can mitigate that and improve it, if we want to actually change it fundamentally, then it will need a change to the regulations."

Nevertheless, the debate has now been politicised, with Red Bull, for one, convinced that it is down to Mercedes lobbying. Asked if it is possible for the debate to be finalised on pure technical terms or whether it is inevitable that it will end in a political situation with teams vying for their own competitive benefits, Shovlin admits: "It's difficult.

"The reality is that we are working to solve our problems on our own," he continues, "and I think we've made good progress on that.

"So we're certainly not at the position of saying regulation changes are definitely going to be in favour of Mercedes," he insisted. "Our stance would be that if we want to solve some of the fundamental issues, you're not going to do that leaving the rules alone. But when that rule came in, in 2020, on safety grounds, Red Bull were not opposing it, Ferrari were not opposing it, from a viewpoint of the governance, but importantly, Mercedes weren't opposing that change. You know, it happened, it didn't suit us. But it did come in and it happened."