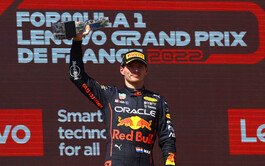 Max Verstappen: "It was a difficult one out there today, I was off the pace and unfortunately wasn't able to get the podium we wanted. I struggled with tyre management and it was tough to get on top of it. I had a close battle with George but it was a good one, I wish we could have pushed for a 1-2 but Mercedes were very strong and it was difficult to overtake them. There are some bits for us to analyse and hopefully I will recover my pace and come back stronger for Hungary."

Sergio Perez: "We had really good pace from the start, although following around here, the tyres overheated a lot so I couldn't really go for a move but I stayed calm and stayed close. It was really unlucky for Charles and I'm glad he's okay, it could have been a really fun race because both cars were so quick! From there I just concentrated on my own race and looked after the tyres. The pit lane is so long here so that prevented us from having another pit stop. Today was a great day but there are plenty more races ahead of us and I just always aim for the most points possible, the fight is nowhere near over."

Christian Horner: "The main thing today is that Charles was ok, it was a cracking race between Max and him in that first stint. We pushed the button early and went for the undercut, Max had effectively taken track position, so it's a shame we didn't get to see how that played out, it would have been a great battle. In the end it was a straight forward victory for Max and a very good point scoring day.

"It was frustrating we didn't have Checo on the podium too, it was just bad timing for the virtual safety car for him, there was a software error so they were held longer than they should have been. We have to keep pushing this season and look to get the best out of every ounce of performance, there are lots of factors at play but today was a big day for us."

Check out our Sunday gallery from Le Castellet here.