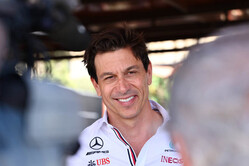 Away from the on-track action, tension is simmering as teams question rule changes for 2023 and Mercedes boss, Toto Wolff accuses them of "posing"

While Liberty continues its endeavours to make F1 the choice of sport for all the family, those age-old political tensions that have plagued the sport over the decades continue.

Other than the ongoing row over budget caps, the teams are now divided over the recent regulation change for 2023 which will see floor edges raised by 25mm, along with the raising of the underfloor diffuser throat. Furthermore there will be more stringent lateral floor deflection tests and the introduction of a more accurate sensor to help quantify the aerodynamic oscillation.

The change, announced following the recent meeting of the Technical Advisory Committee, forms part of the ongoing clampdown on porpoising and bouncing.

When the FIA first issued its technical directive relating to the phenomenon, other than the fact that the person behind the move was said to be Shaila-Ann Rao, who had previously worked with Mercedes and as Special Advisor to Toto Wolff, it was argued that the move was to punish those who had got the new rules right and for the benefit of those that hadn't.

With the metric set to be introduced at Spa next month, there still remains the matter of the planned changes for 2023 which some argue are not necessary. Indeed, even some of those who accept the changes insist that it has been left too late.

Despite the lack of agreement, the FIA is forcing the change through on safety grounds, which again has drawn criticism. A number of teams dismiss the safety grounds argument insisting that they are - and have always been - on top of the issue and as a result it is thought that other than a legal challenge, Ferrari might yet use its power of veto.

"I read in the media that it is not relevant, it's not a big change, so why are they fighting that we're threatening to go legal?" he said. "No team is ever going to go legal against the FIA, number one, plus, if the FIA decides to implement something on safety grounds. I'd be watching guys. So I think this is just posing.

"I think it's just business as usual," he continued. "There is an inherent issue of cars that we are not seeing here, that we've not seen in Austria, neither did we see it in Silverstone, because the tracks are the flattest of the year. But it didn't go away.

"The cars are way too stiff and they bounce," he added. "And if you ask the driver, you will probably have a majority that will, if asked anonymously, tell you that. I think there was such a discussion among the drivers and there's also an outcome that nobody talks about. And I think we'll see where that goes."

"There's an awful lot of lobbying to change the regulations significantly for next year, so a certain team can run its car lower and benefit from that concept," said Christian Horner at the weekend.

"It's a very late point in the year to be doing this," he added. "Hopefully a sensible solution can be found. Because it's too late in the day for fundamental regulation changes, which something like that would be."

"We haven't had a problem all year," he smiled. "There's only one team that has had a big problem... just run the car higher, it's easy.

"We've got some of the most talented engineers in the world in this sport, and I can almost guarantee you if we came back next year, there would be no cars with issues. With the last few races, it's looked okay. Here it looks okay. What you don't want to do is kneejerk into an overreaction that could have fundamental impacts on next year's cars."

"Clearly when you're running in the front you just want to just make sure that nothing changes, and when you're not running at the front, you want to make sure that a lot changes. So these are the two spectrums of positions that this is really about. Let's just ask the drivers."