Engine penalties for Sainz and Magnussen 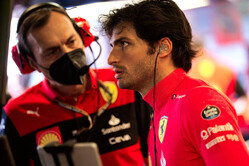 Carlos Sainz and Kevin Magnussen will start the French Grand Prix from the back of the grid after taking on new engine elements.

The Spaniard had already incurred a 10-place drop after taking on new control electronics, but today after Ferrari opted to take on a new ICE (internal combustion engine), turbocharger, MGU-H, MGU-K and exhaust system, he drops to the back of the grid.

At Haas, Magnussen takes on exactly the same package, while Charles Leclerc takes his 6th exhaust system of the season.

"It's disappointing but we have to do it," admitted Guenther Steiner, "we had to introduce a fourth engine at some point."

Sainz was quickest in yesterday afternoon's session, and went on to out-pace his teammate in final practice, while Magnussen ended FP3 in 16th.

"The lap times of Kevin, shows we are pretty quick here," said Steiner as Haas aims for its third successive double-point finish.

Check out our Saturday gallery from Le Castellet here.