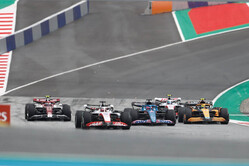 "I have never enjoyed an on-track sequence as much," admits Lando Norris, of 5-way battle at the Red Bull Ring.

Having been quickly dispatched by Esteban Ocon, Guanyu Zhou found himself under attack from two-time world champion, Fernando Alonso.

However, as the two fought, they were joined by Kevin Magnussen, Lando Norris and Mick Schumacher and suddenly we had five cars, sometimes three or four abreast, fighting for position.

"I am not sure I have ever enjoyed an on-track sequence as much as that five-car battle on Sunday," admits Norris in the Telegraph.

"It is not necessarily that overtaking is easier with these cars," he admits. "In fact, it is probably a bit harder in that the slipstream is a lot less, so you do not have closing speeds of 30kph (18mph).

"But it also means that having overtaken, you cannot blast off. The other (driver) can follow you and stay within DRS range for the next lap. You have this constant battle, lap after lap after lap.

"It has become a far more tactical battle in terms of where to conserve your battery, when to deploy it, where you make your overtakes. Especially when there is a group of you clustered together as there was on Sunday.

"Initially, it was the Alfa Romeo of Zhou and the Alpine of Alonso fighting it out. But that allowed the two Haas cars as well as myself, to close right up to them.

"It was hugely exciting when we all converged; five cars fighting for position into turn three is not something you would normally see, even on an opening lap.

"The track plays its part, obviously. The Red Bull Ring does allow for good wheel-to-wheel action. In the sprint race on Saturday, Alex Albon and I were side by side for about half a lap, which was pretty cool.

"The racing is fantastic at the moment," he concludes, "and the FIA and Formula One deserve huge credit for these new technical regulations which have definitely contributed to what we are seeing, as well as the safety innovations that have no doubt already saved lives, like the halo."