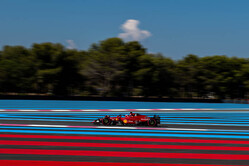 Carlos Sainz and Charles Leclerc were first and second fastest respectively for Scuderia Ferrari come the end of the day's practice for the French Grand Prix. It was a busy Friday, teams having to deal with the added complication of suffocating heat inland from the Riviera. Between them, the drivers completed 84 laps, splitting the programme in the second session to get as much data as possible relating to the behaviour of the Pirelli tyres on the demanding surface of the Paul Ricard Circuit. Also on the agenda, evaluation of some aerodynamic updates brought from Maranello for this race. Another factor in the decision to split the programmes is that fact that Carlos' car was fitted with its third Control Electronics and as two is the permitted number per season, he will have a grid penalty to contend with for Sunday's race.

Charles and Carlos waited a few minutes before going out on track, running different programmes, partly because the Spaniard has a grid penalty here having fitted a third (one more than permitted) Control Electronics. Leclerc went out on Medium tyres, immediately posting a good 1'34"182, while Carlos opted for Softs to do a 1'33"322. The Monegasque then did a qualifying simulation run on Softs, getting down to 1'33"136, while Sainz, fitting a new set of the same compound, went significantly quicker with a lap in 1'32"527. Charles had another go, getting down to 1'32'628, to go second quickest. In the final 15 minutes, both cars ran with more fuel, as the drivers began to work on race configuration. The cars will be back on track at 13 CEST tomorrow, for the third and final hour of free practice, prior to qualifying at 16.

Carlos Sainz: It has been a positive day. The updates seem to work well and the car felt good, especially on the flying laps. The long runs were a bit more challenging due to the graining. For sure, today's high temperatures were an important factor to consider, but we need to look carefully into how we can protect the tyres as much as possible.

Given I'll take a penalty on Sunday, we now need to focus on preparing the car for the race. There is room for improvement, so we'll keep digging!

Charles Leclerc: The sessions went quite well today. Our qualifying pace was pretty good, so our focus now will be on our race pace.

Tyre management will be key, as the temperatures are so high this weekend. I am confident that we will be all set by the time Sunday comes as we know where we need to improve.

Check out our Friday gallery from Le Castellet here.