"It was heart-breaking," admits Sainz 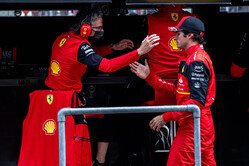 "No, no, no, no, no..." cried the Spaniard, and surely only the hardest heart would have failed to have been moved, as Carlos Sainz' Austrian Grand Prix, and possibly his season, literally went up in smoke.

Looking set to follow his teammate's example and pass Max Verstappen, thereby setting up a Ferrari 1-2, the Silverstone' winner's dream was ended when smoke began to pour from the back of his car.

Quick to park up, albeit on an unforgiving gradient, the Spaniard eventually got free of his car, which by now was fully on fire.

"There was nothing coming from the engine that this was about to happen," he told Sky Sports. "It was very sudden, and I'm bit a lost for words.

"There is damage for sure, which is not ideal. It is something that we need to look at.

"The pace was there, the degradation was very low on our car, we were fast. I will take it and turn the page as soon as possible."

Already on his third engine of the year, the failure means that as we reached the mid-point of the season, Sainz will almost certainly face a penalty further down the line when he takes on a new unit.

At the same time, what was a 12 point deficit to his teammate, has now become a 37 point deficit, meaning Ferrari will likely favour Charles Leclerc as the title battle intensifies.

The failure came just 5 laps after Leclerc had passed Verstappen for the third time during the race, and it was only a matter of time before Sainz followed through.

"For sure it is more difficult to take because we were about to cut the points to the leaders of the championship, both Max and Red Bull," said Sainz.

"We were about to do a very big result for the team and one of the cars DNF'd, so it is heart-breaking, but we need to keep pushing. There is a long season ahead."

Asked about his difficulty in getting out of the burning car as it rolled backwards, he admitted: "Yes, it was a very tricky situation because I wanted to jump out, but the car was rolling backwards and I didn't want the car to roll back forever.

"I knew I was catching a bit of fire and I was waiting for the marshals to come. They never came until quite late, so it was a bit of a moment, but nothing happened."