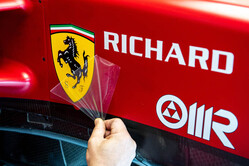 To mark the 90th anniversary of the first appearance of the iconic prancing horse logo on one of Enzo Ferrari's cars, the Italian team is sporting the original logo on its cars this weekend.

The prancing horse was originally the emblem of fighter pilot and war hero Francesco Baracca, whose Mother suggested Enzo Ferrari use it on his cars for good luck.

The current emblem is essentially similar to the original, which featured a yellow background as a tribute to the city of Modena, along with the team's initials and the Italian colours at the top.

The slight difference is that the original horse was less stylised, while the team initials were smaller and spaced further apart.

On this day, 90 years ago in 1932, the emblem made its debut appearance on the Scuderia Ferrari Alfa Romeo 8C 2300 MMs, driven by the pairings of Antonio Brivio-Eugenio Siena and Piero Taruffi-Guido d'Ippolito. The race ending in a one-two finish.

Other than seeing the F1-75s at Spielberg, the original emblem can also be admired at the Maranello Museum where it features on an Alfa Romeo 8C raced by the Modenese squad, along with a Rudge motorcycle that the Scuderia raced mainly in the Italian championship from 1932 to 1934.

In fact, the very first appearance of the emblem was on a motorcycle, at the Circuito di Pontedera race on 3 July that same year.

Both the car and the motorbike form part of a major exhibition, Scuderia Ferrari - The Full Story, which features several unforgettable models that tasted both legendary victories and defeat in Formula 1 and sports car racing.

Check out our Saturday gallery from Spielberg here.