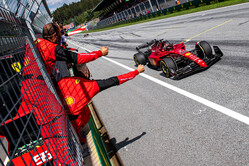 Having already lost Carlos Sainz, Mattia Binotto admits to not watching the last few laps of the Austrian GP as Charles Leclerc battled a throttle issue.

Shortly after Sainz' retirement on lap 56, Leclerc began complaining of a sticking throttle, and despite the best efforts of his team to guide him through the problem, Max Verstappen begin to close the gap.

The Monegasque got the car to the flag, giving Ferrari its fourth victory of the season, and closing to within 38 points of Verstappen in the championship fight.

Nevertheless, it was all too much for team boss Binotto.

I have to admit I was very nervous," said the Italian. "Disappointed as well because of what happened to Carlos.

"I was so nervous that I stopped watching the race in the last three laps," he shyly admitted.

Asked the cause of Leclerc's issue, he said: "I think we need to confirm. From what I heard, the initial feedback is that it was more of a mechanical one. But I don't have more detail than that."

"It was not only a little bit stressful, it was very stressful," said Leclerc. "The throttle was very inconsistent and in the middle of corners it would get a bit stuck to whatever percentage.

"In Turn 3 it was very tricky as that's where you don't want any more mid-speed corner," he added. "It was quite tricky to manage, not so much in the high speed, mostly in the slow speed but at the end we managed to get the car to the end which is great.

"Weirdly it was more or less at the same time (as Sainz had retired)," he admitted, "so of course I had it in my mind.

"I knew it was not a problem with the engine because it was really the pedal that was feeling weird, first at pick-up and then at the end it would not come back to zero. But luckily it went until the end of the race.

"I definitely needed it," he said of the win, "of course whenever I get to a new race, since five races ago I have a smile on my face and I kept being optimistic but obviously hard races after hard races it felt like everything was against me.

"Finally we had a breakthrough, a good race today and it feels great to have the win again."