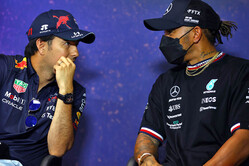 Q: Sebastian, very warm welcome. So, let's start by talking about old cars. It was a '92 Williams for you at Silverstone a few weeks back, and it's '22 Aston Martin this weekend, right? Tell us a little bit more.
Sebastian Vettel: Correct. I don't think you can go much older. Yeah, it's going to be exciting, I'll go right after this, to do a little bit of driving on the track. And obviously, it's a very different car but it's to celebrate the 100th anniversary. And it was the car that was competing in the first Grand Prix - not Formula 1 Grand Prix, because that was in 1950. But first Grand Prix, I think it might even have been the French Grand Prix, as far as I learned, so...

Q: Let's bring it on a hundred years now, to this weekend's French Grand Prix. Paul Ricard hasn't been the kindest place to you, in recent seasons. After a frustrating weekend in Austria. Are you hopeful of a more competitive showing this weekend?
SV: Yeah, I am looking forward. We brought an update to Silverstone that we didn't fully get on top of yet. And maybe this weekend will help us to get a little bit more answers. So, exciting. And I hope we can be a bit more competitive, to get back in the midfield and therefore, a bit more back in the mix. The track's what it is. It's not the most exciting track in the world, but still quite challenging and technically demanding, and it's going to be very hard. So, we'll see what the weekend brings.

Q: Sebastian, final one for me, silly season in full swing. Can you give us any insight into what you're thinking about your future?
SV: Well, I'm racing this weekend, and the next one. Then, yeah, obviously I've said that at some point, we'll start to talk. I'm talking to the team. I think there's a clear intention to keep going. And we'll see soon where we stand.

Q: Charles, coming to you now, you started your career at the Brignoles kart track, just down the road. So does this feel a bit like a home race?
Charles Leclerc: Yeah, definitely. I mean, it was it's only 60 kilometres away from here. Very, very good memories. I didn't come to this place very often, before being a Formula 1 driver. But it's always nice being here. And I hope we can have a good weekend.

Q: Were you actually karting last week, did I read?
CL: Yes. I was. In Brignoles, actually!

Q: What's going on in Formula 1? It was an important victory for you last time out in Austria, where Ferrari were faster than Red Bull in the race? Do you think we'll see something similar this weekend? What are your expectations?
CL: Well, I hope so. It was definitely an important victory, especially for me. I mean, we've had five very difficult races on my side where everything felt to go against me. So, it was important to have that win, take some points back to Max. Considering for this weekend, we need to see, because the last two years have been very, very difficult: tyre management has been a thing and we've been particularly struggling, so we will put our full focus on that in free practices, in order to be ready for the race.

Q: Lando, coming to you now. It's been a solid haul of points for you in five of the last six races. Are you satisfied with how the team has been going of recent?
Lando Norris: I'm satisfied. I think... I guess every race is always what could we have done a little bit better and could we have scored any more points? But, in general, I think it's been a good run. We've been consistent, which is always a good help. I know things like the five-second penalty last weekend was, I guess, a little thing which made it a bit harder and maybe we could have had a good fight with Mick for a few more points. But, in general, you know, we've been doing a good job. We've been maximising our potential from the car. A lot of other people brought upgrades over the last few races and we've still been managing to stay there in the fight and getting the points that we need. So, been doing a good job, I'm happy and we'll try continue to that.

Q: Very close fight with Alpine in the Constructors' Championship. You're level on points. How do you see that battle?
LN: I think it's going to be very tough. The Alpines, especially since the last... I mean all season I think they've been extremely quick. Fernando's always been there fighting - for poles sometimes. So, they're fast. They're consistent as well and especially now, they seem on a very good run with a very strong car. So, it's going to be tough to keep them behind and keep the battle going. But we're motivated, we know we can do it. I think we've been showing that we, even with a car which maybe isn't quite as strong as them, we can still outperform them and outscore them, so hopefully, especially because it's their home race. We can get one up.

Q: Charles said he's a little bit nervous after Ferrari struggles at this race last year. On the other hand, it was a very good race for McLaren here last year. Does that give you some confidence going into the weekend?
LN: Always does. I think what we were the opposite of Charles last year, we were very strong on tyres. So of course, we hope that kind of continues. And Paul Ricard, I guess for me, as a driver, has always been one of my better tracks. One I've always treated very well and have performed well at and been fast at, so yeah, let's say it's kind of simple as it is, it's one I kind-of enjoy, especially just in qualifying, putting the lap together and so on: a good mixture of high-speed, low-speed corners. But the race was exciting as well, you know? Doing a different strategy, doing the overtaking in the racing, always makes your Sunday more entertaining. So hopefully, more of that again this weekend.

Q: Nicholas, coming to you now. You're going to be running the new parts on the car this weekend. What are you expecting from them?
Nicholas Latifi: I guess the simple answer is more lap time. Obviously, the past two rounds, Alex has run with the upgrades and I haven't and Silverstone was quite obviously tricky to kind of get any meaningful data on it. Obviously, wet qualifying, he didn't get to do any laps of the race. But Austria, there was some clear positive signs of what the new package was bringing. So yeah, knowing that I was going to be getting them this race was kind of just, you know, obviously try and maximise what we can. But again, we are still the... I was still in the slowest car, and it was just kind of getting through that weekend. And ultimately, there was no opportunities that really presented themselves. So, it was a little bit of a frustrating one, for sure. Especially when you lose the one real reference that you have, which is always your teammates. This week, now obviously getting the upgrades, just curious to see how it's going to feel. I mean, there is some feedback from the team and from Alex that I've been hearing, that might require, you know, a difference in driving approach; different compromises on the setup. So, I think from my side is just going to be trying to, you know, get on top of that, as soon as we can. Obviously, we do have an idea of where we have to pitch the car and myself going into it. I've been listening quite in detail to what the team and Alex has been saying about it. Hopefully it's just going to give us those few extra tenths that sometimes we've been missing and that, in some situations, like in Silverstone, probably would've made the difference between scoring points and not, So, yeah, it's a weekend I'm looking forward to for sure.

Q: Zhou, coming to you now, Austria was a frustrating race for the team, not just you. How hopeful are you of a more competitive showing this weekend at Paul Ricard?
Zhou Guanyu: Last time out we struggled as a team; tried to get the balance right for Quali and then in the race it was very difficult to overtake, stuck behind AlphaTauris. this weekend, coming through, firstly with the temperature, the track layout is completely different. And for me, I think I never raced in such a high temp track and that could be affecting a lot tyre saving, and tyre management in the race could be playing more into our hands in a way, and in the past, obviously, in these hotter conditions, it seems to be like our car is performing a little bit better than the cooler conditions, so hopefully, we are able to get back to the pace we were missing last time out in Austria. Obviously the whole team. I think it was a tough one for me, especially in Spielberg, just because coming from Silverstone, and completely new chassis just have one session before the parc fermé qualifying rules. So, to get the balance right wasn't easy and I didn't get it right straight away. This weekend could be a bit easier, just to get into that rhythm, and finding the right balance for me ahead of quali and the race.

Q: You talk about the need for tyre management in the heat this weekend. What about driver heat? How have you prepared for these high temperatures this weekend?
ZG: I mean coming from UK last weekend, I've been prepared pretty well!

Were you outside the whole time in the heatwave?
ZG: Kind of! But not, you know, around lunchtime. Luckily, I've got aircon in my house. People were suffering a bit more, but yeah, coming to obviously this weekend with the high temperatures, for us as a driver, you have to stay hydrated quite a lot. And normally I don't actually use the drinks system in the car and the only races I used it were Miami and Bahrain. So, I think I'm going to definitely put it on for this weekend. But these things, when you drink hot water, in the race is not a nice thing to do. But still, I think the whole weekend, not just for the drivers, for the mechanics in the garage, that will be very tough weekend, because I don't think it's often we have such a high temp.