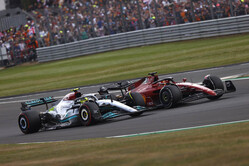 Never mind "Where's Wally?", since around 11 December last year it's been a case of "Where's Ross?", as the poacher turned gamekeeper went remarkably quiet.

Until then, around 48 hours after each race, Brawn would pen a debrief for the sport's official website either extolling the virtues of the race we had just witnessed, or pushing various gimmicks like reversed grids and the Sprint.

Then came the events of Abu Dhabi, and though we waited and waited on the Sport's Managing Director's word... there was nothing, not a dicky bird.

Then came the rules overhaul, of which the design guru was the driving force, aided and abetted by a vast team of colleagues from all corners of the pitlane.

However when the rules overhaul didn't prove to be quite the overnight success we had been promised, with cars forming DRS trains still unable to overtake, again there was silence.

Now, in the wake of Sunday's admittedly thrilling British Grand Prix, Ross is back to tell us how wonderful things are.

"This year's race at Silverstone was a classic," he tells the sport's official website, the website where the paddock is all milk and honey, no disagreements or controversy, "and a perfect demonstration of what the sport was trying to achieve with these revolutionary new racing cars.

"We were treated to some fabulous racing," he continues. "What pleased me was the precision the drivers could have with the cars. We saw countless fascinating battles that went for several corners, with multiple changes of position. We saw drivers were able to take multiple lines with these new cars, and that allowed for two, three or even four cars going almost side-by-side.

"The quality of the passes was high, too," he enthuses. “Drivers really had to work to get a move done, it wasn't simply a case of using DRS to fly by

"We've seen some cracking battles this year, including wheel-to-wheel fights with multiple changes of position for the lead of the Grand Prix between Charles Leclerc and Max Verstappen in Bahrain and Saudi Arabia.

"The drivers are enjoying these cars and have been very positive," he insists. "They have all appreciated the change and the newfound ability to get up close to other cars.

"Many of them have qualified that while it doesn't always lead to straightforward overtaking, the chance to sit on the tail and pressurise and try and force a mistake is significantly improved," he adds. "I don't think there has been a single driver who has not acknowledged or been enthused by that.

"The frequency where cars are following for consecutive laps and challenging for consecutive laps is much better this year than in previous years. What it demonstrates is the direction F1 and the FIA have gone in is absolutely the right direction to follow, and the sport can go forward with renewed confidence that this approach is what is needed for the future. It must always be a significant factor in the design and modification of these cars."

Of course, what must not be forgotten is that it looked very much as though the main talking point on Sunday was Guanyu Zhou's horrific crash at the start of the race.

However, what turned the race on its head, and allowed the cars to get 'close and personal' was the safety car that followed Esteban Ocon's decision to (in)conveniently park his sick Alpine on the old pit straight.

As ever, the safety car bunched up the field - a la Abu Dhabi - gave some - but not all - the opportunity to pit for fresh rubber, and set up a 10-lap sprint/Sprint to the finish.

Not for the first time, the race highlights appeared to be more about Turk Thrust and the Formula One Script Unit than Ross and his chums, but perhaps we're being overly sceptical.