"Reliability on car 14 should be a little better," says Alonso 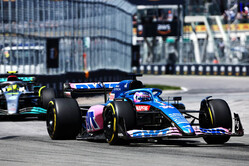 Compromised by an engine issue, Fernando Alonso was understandably disappointed to finish ninth in Canada, admitting concern that issues only appear to arise on his car.

In the end, that much anticipated scrap with Max Verstappen was a bit of a damp squib, while a missed opportunity in terms of pitting under the VSC saw Fernando Alonso's afternoon go from bad to worse.

As if this wasn't enough, the Spaniard then suffered an engine issue which further compromised his hopes, only to be penalised post-race for weaving.

It was not the afternoon the Samurai, or any of us, had hoped for.

"We had an engine problem on lap 20 where we cut the energy very early on the straights, as soon as we exited the corners," explained Alonso. "We tried to fix it but it didn't work.

"Luckily we didn't retire the car and we still scored a few points," he added, "but until that point I think we were fighting for the podium at the beginning of the race.

"I felt strong compared to Hamilton," he insisted, "we just didn't have the pace of Verstappen and Sainz. I was OK to control Hamilton in the Mercedes.

"Then the virtual safety cars... lucky or unlucky, that could change the race. But we could still maybe be fighting for P3, P4.

"But then when the engine problem came, it was just trying to survive, trying to get the DRS, driving kamikaze in the corners before the detection, because the DRS was my only safety on the straights after that."

Such was the problem the Spaniard complained to his team that he was losing "seconds" each lap, his frustration all the more because his car had been fast all weekend, especially compared to teammate Esteban Ocon.

"I could not pass (Esteban), it was very frustrating, my car was flying this weekend. I had a one second deficit on the straights and still I was quicker on the race. It's unbelievable to finish P7.

"It's another reliability issue on car 14 only," he added, the Spaniard infamous for his reputation for political manoeuvring within his numerous teams. "That's disappointing. I'm here trying to be better than sixth and seventh.

"If we didn't finish on the podium or in P4, it's because we had a reliability issue on car 14," he insisted. "Unlucky maybe with the virtual safety cars but the luck, you can't control. Reliability on car 14 should be a little better."