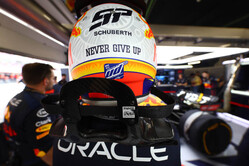 Having grudgingly obeyed the order to yield to his teammate at Barcelona, Sergio Perez calls for talks with his team.

In a rollercoaster Spanish Grand Prix, that, among other things saw Charles Leclerc retire whilst heading to certain victory, Sergio Perez found himself leading the race and heading for his first win of the season.

Previously, the Mexican had called on his team to be allowed to pass Max Verstappen and attack race leader George Russell on his fresher tyres. Approval was given and he duly passed the Mercedes before pitting six laps later, handing the lead to his Dutch teammate.

Regaining the lead on lap 44 when Verstappen pitted, just four laps later Perez was told: "You're on a different strategy to Max, if he's quicker let him through."

Perez duly yielded to his teammate, before pitting five laps later for the soft tyres that would allow him to claim the fastest lap of the race.

After crossing the line, 13s down on his teammate, Perez' radio call was none too subtle.

In the aftermath of the race, having had time to calm down, Perez opted for the diplomatic approach.

Asked about his radio calls, he replied: "We were on different tyre strategies at the time. I let Max by in the beginning, then I thought at the time I could go by and not lose crucial seconds to make my strategy work. But anyway, it's a good team result," he insisted.

"Our responsibility is to bring the two cars home with as many points as we can," explained team boss, Christian Horner, "and of course what Checo couldn't see at the time, which he could see perfectly well now, is that he had such a long stint to do on the medium tyre.

"Max had such a tyre advantage from a team perspective there is just no point in taking that risk with an intermittent DRS, with temperatures raging up and down. So it was absolutely the right thing to do," he insisted.

"In the heat of the moment you can understand it," he admitted. "If he wasn't pushing those types of things he isn't doing his job."