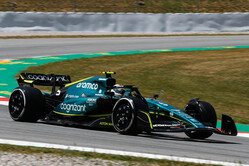 Following claims that aspects of the revised Aston Martin resemble the Red Bull, the FIA has cleared the Silverstone-based outfit of 'copying' its rival.

While it was expected that the pitlane would be awash with upgrades this weekend, nobody was really prepared for Aston Martin to reveal a car which, from the outside, appeared to have been upgraded into a Red Bull.

Featuring a new floor, sidepod, bodywork, cooling louvres, rear wing and Halo, the revised AMR22 was immediately dubbed the 'Green Red Bull', this just a couple of years after the tRacing Point saga.

Among those to notice the similarity, which, it was suggested, follows Aston Martin's recruitment of former Red Bull technical director, Dan Fallows, was Christian Horner.

"Copying is the biggest form of flattery," he told BBC Sport. "It is quite a thing to instruct your team to come up with a very close-looking clone of our car and of course a few people have moved over the winter period, and what you can't control is what they take in their heads.

"But what would be of grave concern to us would be if any IP had in any way changed hands," he admitted. "That is where we rely on the FIA to do their job, they research, they have all the access and we will be relying on them heavily to ensure that no Red Bull IP has found its way into that car."

Keen to put out the fire before it takes hold, the sport's governing body was quick to respond, and while admitting that during a "routine pre-event legality check" of the Aston Martin updates, "it became apparent that a number of features resembled those of another competitor".

Consequently, in order to confirm compliance with Article 17.3 of the sport's technical regulations, which relate to reverse engineering and "potential illicit IP transfer", the FIA held an investigation.

"The investigation, which involved CAD checks and a detailed analysis of the development process adopted by Aston Martin, confirmed that no wrongdoing had been committed," said the FIA in a statement, "and therefore the FIA considers that the Aston Martin aerodynamic upgrades are compliant.

"Article 17.3 specifically defines and prohibits 'Reverse Engineering', i.e. the digital process of converting photographs (or other data) to CAD models, and prohibits IP transfer between teams, but equally, this Article permits car designs getting influenced by those of competitors, as has always been the case in Formula 1.

"In the analysis we carried out we confirmed that the processes followed by Aston Martin were consistent with this Article's requirements."

"We have shared details of our update with the FIA technical people," said an Aston Martin spokesman, according to Motorsport.com. "Having analysed the data and the processes used to create the update, the FIA has now confirmed in writing that our update was generated as a result of legitimate independent work in accordance with the technical regulations."

Red Bull has yet to respond.