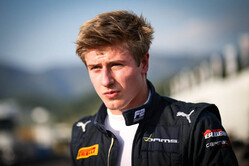 Estonian driver Juri Vips is to make his F1 race weekend debut on Friday, when he replaces Sergio Perez in the second Red Bull in opening practice.

Vips, who is currently 8th in the F2 championship, joins Nick de Vries who is also making his FP1 debut, replacing Alex Albon at Williams.

This season, teams are mandated to run young drivers in two sessions, in an attempt to give them more experience what with in-season testing no longer an option.

With the majority of the opening races being 'flyaways', this weekend represents the first opportunity to give the youngsters a run.

Enrolled in the Red Bull Junior Team in 2018, Vips received his Super Licence after completing a 300 km test with Red Bull at Silverstone.

Winner of the 2014 ADAC F4 championship, Vips has served as a reserve driver for Red Bull and AlphaTauri at the Turkish, Bahrain, Sakhir and Abu Dhabi Grands Prix and drove for the Austrian team in the post-season tests in Abu Dhabi in 2020 and 2021.