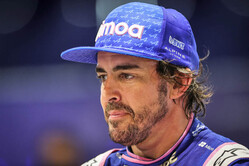 The team heads to Barcelona having scored four points at the Miami Grand Prix. Team Principal Otmar Szafnauer reflects on the previous race weekend and outlines the team's ambitions for the Spanish Grand Prix.

What are the main reflections from Miami for the team?
Otmar Szafnauer: It was great to experience a new event in Miami and it's always fantastic to witness the buzz that Formula 1 creates when it enters such iconic places. As normal for a new event, there were positives and some really excellent new ideas, while with a first race there were inevitably some things to refine to further improve for next time. Those things naturally occur over time as an event evolves but, all in all, it was a great experience for Formula 1. Right now, we're focusing on Barcelona and a return to more conventional surroundings, which we're all very familiar with since we visit this track twice a year!

How is the team approaching this weekend's Spanish Grand Prix?
OS: Firstly, the aim is for us to have both cars inside the points, which we're yet to achieve since the first race of the season. If we're going to achieve our goals for the year, then this is the minimum requirement the remaining Grands Prix. We've demonstrated consistently we have a competitive car and it's important now that we convert that promising pace into points on Sundays. We're certainly aiming to bounce back from Miami by having a much better, and cleaner, race weekend. We can only control what is in front of us, so that's the target in Barcelona and both drivers are ready to deliver.

What upgrades are the team bringing to Spain?
OS: This year's championship is intriguing as all teams aim to upgrade and better their race cars. So far, we're pleased with the upgrades we've introduced to the A522 to keep ahead in this sub-race, including the new floor to both cars, which has performed well. Our development programme is in full swing and we'll keep the updates coming at the next few events. For Barcelona, both cars will have a new rear wing, which is much more efficient than the previous design.

Esteban Ocon secured strong points in Miami after his charging from the back of the grid to eighth place. Now the Frenchman returns to the Circuit de Barcelona-Catalunya where last year he stormed to a sensational fifth place on the grid.

A week later or so, how do you reflect on the first Miami Grand Prix?
Esteban Ocon: It was a memorable weekend and a unique spectacle for everyone involved in Miami. Americans really know how to put on a good show! For me, it was a rollercoaster of emotions, which ended on a high with a points finish after missing Qualifying. Miami will definitely stand out at the end of the season as a special race. Now, as a team, we must build on our points haul as we head back to Europe to a track we all know very well. Everyone is hungry to perform and keep scoring more points in the weeks to come.

Back to Barcelona, do you enjoy driving around the Circuit de Barcelona-Catalunya?
EO: Barcelona is one of those circuits all teams, and all drivers, know very well. We have raced and tested there for a while now, but of course it does bring its own challenges just like any track. The first two sectors are fast and can be tricky, with tyre management being very important. The final sector is slow speed and you normally feel a loss of grip towards the end of the lap as the tyres overheat. In general, it's quite difficult to overtake in Barcelona, although the long downhill straight can give power and DRS advantage, so that is a key part of the circuit. It makes Qualifying and race strategy particularly important to gain track position. Last year, I qualified fifth on the grid so it is a track I enjoy, and we know we can be competitive there.

Do you prefer racing at new tracks like Miami or going back to tracks you know well, like the Circuit de Barcelona-Catalunya?
EO: I think both new and familiar tracks each have positives. It's nice to have a mix of new venues as that means new areas of the world are really embracing Formula 1 and we know the popularity of the sport is getting bigger. It's also nice to visit new cities and race in front of new fans. The fact that a track is relatively unknown to all teams makes things a little more interesting and it's a battle to see who adapts to the new conditions best. On the other hand, I think everyone enjoys going back to familiar places where we know what to expect, and in a way be better prepared. I personally always enjoy Barcelona and it is a bit like another home race for me given my Spanish roots. I can't wait to get back out there and perform in front of the passionate Spanish fans and hopefully have a smooth weekend.

Fernando Alonso returns to the Spanish Grand Prix for the nineteenth time in his Formula 1 career. Despite turning in some strong drives this year, Fernando is left with two points on the board after five rounds in the championship. The two-time champion from Asturias, is eager to add points to his tally as we approach the quarter mark of the season.

The Miami Grand Prix was new for everyone. What were the takeaways for you from the weekend in Florida?
Fernando Alonso: Well, I think racing in Miami is really great for the sport. The attention on the race was huge all weekend and we felt the atmosphere in the paddock as early as Thursday. Despite missing out on Q3 due to traffic, I was quite happy that, in the end, we recovered to finish inside the points at the chequered flag, especially after we lost some ground due to the Safety Car. We had those points taken away from us, but we'll make sure we qualify well and hope for a smooth race in Barcelona.

Racing in Spain is something you are very familiar with now. Talk us through the lap?
FA: I have raced many years in Barcelona, so I know the track and place well. It's a track that really shows where your car stands amongst the rest of the field and it's been home to winter testing for a number of years. The track is not easy to overtake on and so you have to qualify well. Unless there is a Safety Car or something unusual in the race then it's difficult to gain ground. We've been qualifying quite well this year so hopefully we can continue the form from previous Saturdays into Barcelona and have a trouble-free race.

Is there any added pressure to racing at home in Spain?
FA: No not really. I've raced here so many times in my career and also in Valencia too, so I'm used to the occasion now and the fans are so passionate and friendly. I enjoy coming back to Spain when I can. I have my museum and track in Asturias where I was born, so I always try to visit there when I'm back in the country.

Fernando Alonso scored an emotional win in 2006, driving for Renault F1 Team in front of an adoring home crowd. Fernando would repeat the feat in 2013.

Esteban Ocon gained 12 places during the Miami Grand Prix, the most in his career so far.

Esteban finished fifth at Barcelona in 2017, his best result of his rookie season in Formula 1.