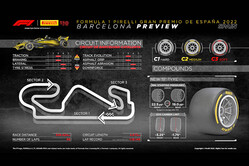 Pirelli brings the hardest tyres in the 2022 range to the race where it is title sponsor in Spain, with the C1 as the P Zero White hard, C2 as the P Zero Yellow medium, and C3 as the P Zero Red soft. It's a pretty straightforward choice - which is the same as last year, albeit using a brand-new family of tyres - with the demands of the Barcelona circuit being extremely well-known from testing and previous races. These famously include the long Turn 3 as well as Turn 9: all corners that put a lot of energy through the tyres.

The teams were at Barcelona as recently as February, three months ago, for pre-season testing. However, there are three big differences to consider: firstly, the teams concentrated on testing compounds in the middle of the range back then rather than the hard; secondly, weather conditions were much cooler; and thirdly, the new cars were in their most basic launch specification. The cars have moved on considerably since then, and it's going to be interesting to see how much that improvement actually is with the latest upgrades.

With Barcelona being a very well-used circuit, there's not going to be a huge amount of track evolution expected over the course of the weekend, thanks to a busy schedule of support races too. Temperatures should be dry and warm, adding to the heavy demands placed on the tyres. The track itself is unchanged compared to last year, when Turn 10 was modified, slightly increasing the overall length of the circuit.

Last year's winning strategy was a two-stopper, the traditional approach to Barcelona, with Mercedes driver Lewis Hamilton triumphing from pole using a soft-medium-medium strategy. Soft-medium-soft was used by all the finishers from P2 to P8.

Mario Isola: "It's hard to say much about Barcelona that hasn't been said already, as it's possibly the best-known circuit on the calendar for the drivers, with its wide-ranging layout making it a perfect testing venue. It has a bit of everything, with the very technical final sector being particularly important when it comes to looking after the tyres. As a result, the teams will have a good opportunity to assess the progress they have made with their cars since the start of the season, although the weather conditions will be much warmer and there will probably be a lot more running on the hard tyre than there was in testing, which will perhaps be the key to the race. In the past, Barcelona has traditionally been a two-stopper, so it will be interesting to see if the new generation of tyres this year leads anyone to target a one-stopper."