Norris battles his way to 8th despite tonsillitis 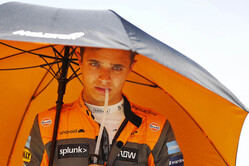 Having admitted following yesterday's qualifying session that he had been feeling unwell, but insisting that it was not COVID, following today's Grand Prix Lando Norris admitted that he was suffering from tonsillitis.

All of which puts his drive to eighth in admirable perspective, whilst putting further pressure on teammate Daniel Ricciardo who finished a distant 12th.

"I was feeling really unwell before the race as I'm suffering with tonsillitis," revealed the British youngster at race end, "and that, in combination with the high temperatures, made this one of the hardest races I've ever done.

"I've been a bit on the back foot this weekend as most of my energy has been spent fighting off this illness," he admitted. "I've had to miss a lot of engineering sessions, which has compromised my weekend."

Having exceeded the track limits his best time in Q2 yesterday was deleted, thereby leaving him to start the race from 11th. However, a solid performance today saw him back in the points after crashing out in Miami.

"I definitely wasn't as prepared for the Grand Prix as I could have been," said Norris. "With that in mind, I'm really pleased to have come out of the race with decent points for the team."

However, it was another disappointing afternoon for teammate Daniel Ricciardo, who, courtesy of Norris' track limits error, out-qualified his teammate for the first time this season on Saturday. Losing a number of places in the opening laps, the Australian never recovered, and ended the race in 12th.

"Yeah, I wasn't there from the start," he told the media. "It wasn't like I had understeer or... I mean I did, but it was just an overall a lack of grip.

"I thought at the start of the race it was very, very slow," he continued, "I thought maybe, I don't know, temperatures just got too high or something with the tyres.

"You know, at the start, you're obviously fighting other cars and maybe things like that can happen. But we did a three-stop race, so I had four sets of tyres today, and was very, very slow on all of them, I'm not sure how.