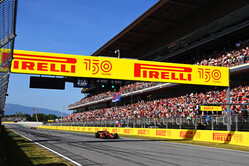 Ferrari driver and championship leader Charles Leclerc set the fastest time of the day in FP2 (1m19.670s) ahead of Mercedes drivers George Russell and Lewis Hamilton, all on the P Zero Red soft tyre. Leclerc also went fastest in FP1, this time ahead of his team mate Carlos Sainz.

At the moment, there's an estimated performance gap of around 1.3 seconds between the hard and the medium tyre, with a 1.1-second gap between the medium and soft. Generally speaking, the rate of track evolution in Barcelona is not particularly high.

Mario Isola: "The free practice sessions went largely according to expectations: after Bahrain, this was the first big 'degradation' circuit of the year and we saw track temperatures that peaked at nearly 50 degrees this afternoon, adding to the challenge: especially for the soft tyre. The front-left tyre was the one that was most stressed and that's going to be the limiting factor, probably leading to a two-stop race for most drivers. How that two-stop is run will be the big question, with the teams having to manage their tyre allocation very carefully tomorrow in order to end up with the tyres they want for the race, bearing in mind also that they have to keep one obligatory set of medium and one set of hard. We saw some quite big gaps here between the compounds in free practice, a bit bigger than we expected this weekend, and that will certainly influence the strategy decisions ahead as well."