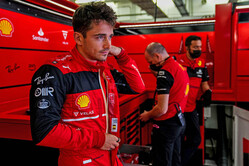 Three months after pre-season testing the teams are back in town, and armed with the data from the previous five races, as expected, upgrades are the order of the day.

As previously reported, Haas will not be introducing any upgrades until the French Grand Prix.

Finally it should be pointed out that most of these components have yet to be tested on track - which should happen over the course of today's sessions, and not every team will have upgrades for both cars.

The lights go green and Vettel leads the way, followed by Bottas, Sainz, Gasly, Latifi, Leclerc, Vips and de Vries. Soon all twenty drivers are on track, most are on hards though a couple are on mediums.

With so many upgrades being tried it is unsurprising that sensors are the order of the day, with Vettel's car sporting a particularly large 'gate' at the rear.

Quickest in all three sectors, Leclerc improves to 22.820 as Ricciardo goes third (23.899), ahead of Gasly, Russell, Tsunoda and Sainz.

Sainz improves to fourth with a 23.738, thereby displacing countryman Alonso.

Early days, but the Mercedes does not appear to be bouncing anywhere near as much as before.

Both Mercedes drivers are running new engines - ICE, Turbocharge, MGU-H and MGU-K - their second of the season.

Verstappen raises the bar with a 22.394, the Dutchman, like Leclerc, on hards.

"Something broke between my back and the seat," reports Tsunoda, "if I pit will you check."

After 20 minutes there's a bit of a lull, with only Kubica, Schumacher and Bottas on track.

Hamilton is told that his main loss to Leclerc is his minimum speed in Turns 3 and 9.

With 32:00 remaining, de Vries is the first to switch to softs. Moments later, Latifi follows suit.

On those softs, de Vries leaps to fourth with a 22.936, as Norris switches to the red-banded rubber.

On the softs, Sainz delights the partisan crowd by going top with a 19.907. Tsunoda goes second and Stroll fourth as more drivers make the switch.

Russell goes second with a 20.590 with teammate Hamilton posting a 20.811 moments later to go third.

Purple in the first two sectors, Verstappen loses pace in the final stages of the lap and can only manage a 20.164 which puts him second.

The stewards have noted a Turn 12 incident involving Hamilton and Alonso, in which the Spaniard appeared to have impeded his former teammate.

A 19.828 sees Leclerc go quickest, even though he is only quickest in the second sector.

Russell reports bottoming at the exit of Turn 9.

Alonso (20.768) improves to fifth on the softs as teammate Ocon goes eleventh.

Then again, Kubica is currently 4.8s off the pace.

"What the hell, I almost crashed into the back of him," says Russell as he encounters a very slow Vips who is on a slow-down lap but sticking to the racing line.

With just under 4 minutes remaining, all 20 drivers are on track.

"He wasn't even trying to get out of the way," says Vettel of Gasly.

The Vips/Russell incident will be investigated after the session.

Far too early to be making any grand assumptions in terms of the upgrades, but that Mercedes does appear to be far less bouncy than usual. Then again, isn't that what we were all saying two weeks ago in Miami.