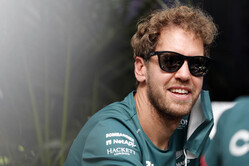 Aston Martin boss, Mike Krack admits that he is keen to retain Sebastian Vettel when the German's contract expires this season.

Having missed the first two races due to COVID, the four-time champion finally opened his - and his team's - 2022 points account this weekend, with teammate Lance Stroll making it a double-pints finish.

Over the last few seasons however there has been much speculation over the German's desire to continue racing, but a number of performances, such as that on Sunday, suggest a Fernando Alonso-like Indian Summer for the Aston Martin driver.

However, ever the purist, like Alonso, for Vettel much depends on the machinery at his disposal and whether it will allow him to actually race.

"It's a no brainer, my contract ends at the end of the season," said the four-time champ. "Obviously it's not the year that everyone in the team hoped for, at least the start of the season, but I think it would be bad to write it off already.

"There's so many things we are currently struggling with when it comes to performance with our car, extracting the performance. I think others have the same or similar problems.

"So there's lots of things that we can still understand and learn, and the next weeks and months will be very, very important to set the direction for this year but also for learning and knowing what to do in the next three, four years.

"In all honesty, I've had an amazing 15 years or so, looking back," he continued. "I was in a position to win championships, win a lot of races, fight for positions, get a lot of podiums, and obviously the taste was great. It's not a secret, if you're not in a position to be there that it's a different taste, you need to find a different sort of motivation. Ultimately, I'm willing to be tasting the same again, that's I think the nature of the sport.

"For some of the guys in the room it's a little bit different because they're still very early in their careers, and they didn't have a team or a car yet where they were able to show what they can do. So it's clearly a different position, but that is I think one of the big deciders.

"The team is growing, there's a lot of things, it looks very promising. The answer is, time will tell... but those will be the key things that I will be looking at, to see how promising it is looking in the future and how soon."

Krack is adamant that he is keen to retain Vettel, and that the team would benefit from the move.

"I'm not going to speak about contracts, but obviously, if you have a driver like Sebastian Vettel, that you can keep motivated by giving him the car that deserves the quality of his driving, I think you would be foolish not to try to retain him," he said.

"He has a very, very competitive approach," he said of his countryman, "despite the big success that he was always already having.

"He has a very high work ethic that I really share and that I really appreciate," he added. "There is no time of the day where it's too late to work or to have some input so from that point of view.

"It's really... it's a pleasure to work with him, because, first of all, he's what I described already, but then also he's a nice guy, he's a nice fellow and he understands where our limitations are at the moment, but he doesn't stop pushing, and he is realistic about what we do.

"So it's a matter of trying to merge what we think we have to do, what he thinks we have to do and be open, transparent, have good conversations and move on.

"Continuity is always something very important," he added. "And then also, the work ethic, the speed, the experience. If you have someone like him in the team, it is of great added value.

"He has a lot of ideas, he's pushing us, at the same time he is realistic about what we can do at the moment. So all in all, I think it's very good because you have other drivers that have driven on a higher level which become very impatient and become very difficult to manage.

"That is not the case for Sebastian, and this is super helpful for us and that is also why we want to stay with him apart from that he's super fast."