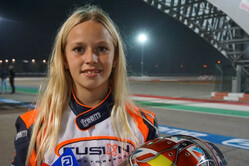 Ahead of the launch of its 2022 contender, the W13, Mercedes has announced its Junior programme line-up.

Identifying and supporting racing talent has always been a cornerstone of the racing philosophy of Mercedes-Benz. In the 1950s, Stirling Moss and Hans Herrmann represented the three-pointed star in Formula One alongside the legendary Juan Manuel Fangio; in the 1990s, a generation of drivers including Michael Schumacher honed their skills in the World Sportscar Championship; and in the early 2000s, Mercedes - together with McLaren - supported the careers of Lewis Hamilton and Nico Rosberg on their road to the highest level of the sport. For 2016, the Mercedes-AMG Petronas F1 Team created a Junior programme in this same tradition, enabling talents like Pascal Wehrlein, Esteban Ocon and George Russell to compete at the sport's highest level.

For 2022, the programme will mark a new milestone as George becomes its first graduate to join the works team as a race driver, and we are proud to announce a roster of seven talented young drivers who will be competing across categories from karting to Formula 2 in 2022 with the team's support. Our 2022 junior drivers are Andrea Kimi Antonelli, Paul Aron, Yuanpu Cui, Luna Fluxa, Daniel Guinchard, Alex Powell and Frederik Vesti.

"It's going to be a really exciting year for our junior drivers, and we're delighted to welcome them to our W13 launch on Friday as part of our motorsport family," said Toto Wolff. "There are some familiar faces in the programme from previous years, looking to build on their strong progress, and there are also several new members of the programme who have joined us this year. It will be great to see how they develop in their first season with us."

"It's definitely a special year with the promotion of George, who was one of our first junior drivers since the young driver programme was reborn in 2016," added Gwen Lagrue, Driver Development Advisor for the team. "Lewis is one of the greatest sportspeople of all time and is an inspiration to all racing drivers, so it will be a brilliant opportunity for our juniors to get to know and look up to the seven-time F1 champion.

"It's also special because we have recruited our first female driver to the programme, with Luna who won the European Mini X30 championship last year. We also welcome Daniel, who had an outstanding 2021 in go karts and will step up to British F4 this year. We now are present in almost every category of the motorsport pyramid, from go karting to F1, with a group of talented young drivers. And we are constantly working on preparing the next generation of F1 and motorsport stars."

"George joining alongside Lewis marks a significant milestone for our young driver programme," said James Vowles, the team's Motorsport Strategy Director. "Every year, the programme has grown, and we are fortunate to have an incredible line-up across categories ranging from karting to F1. We'll be working hard to provide the best support and environment we can, enabling them to focus on the job in hand and deliver their maximum potential. The Mercedes young drivers of today, will hopefully be our champions of tomorrow."

Andrea was born in Bologna, Italy, in 2006 and has been racing competitively since 2014 - quickly moving up the karting ranks, picking up titles and wins along the way. He joined the Mercedes-AMG Petronas Formula One Team's junior programme in April 2019.

Paul was born in Tallinn, Estonia, in 2004 and first sat in a kart at the age of seven. Initially, he didn't enjoy driving, but once he started achieving success, he caught the racing bug and never looked back. He joined our junior programme mid-way through the 2019 season.

Having moved up the karting ranks in Estonia and Europe, which included winning the WSK Champions Cup and CIK-FIA European Championship in 2018 in OK Junior, Paul made the jump to single-seaters in 2019 racing in both the ADAC and Italian Formula 4 series. He moved into Formula Renault Eurocup in 2020, finishing 11th in the standings with one podium finish.

In 2021, Paul continued racing in the category, now called the Formula Regional European Championship, and finished P3 in the standings for Prema with two wins and five further podium finishes. He'll remain in the series with Prema for 2022.

Yuanpu was born in Xi'an, China, in 2008 and first drove a go-kart at the age of six. He joined the Mercedes-AMG Petronas F1 Team's junior squad in 2021, off the back of a positive season of growth and development.

Racing is in Yuanpu's blood because his father was also a racing driver. He first began racing professionally in 2014 with events in China and by 2016, he finished second in the Chinese Rotax series. Over the next few seasons, he began to expand his racing outside of China, competing in events all around the world, picking up podium finishes in 60 Mini and Mini ROK classes across the 2018 and 2019 seasons.

In 2020, he picked up a P2 position in the 31° Andrea Margutti Trophy in OK Junior, scored victories and podiums in the WSK Champions Cup in 60 Mini and scored podiums in the WSK Super Master Series in 60 Mini. For 2021, he continued racing in OK Junior classes with Kart Republic (Argenti Motorsport), competing in a number of different karting series, and will step up to OK for 2022.

Luna was born in Spain in 2010 and is the latest addition to the Mercedes F1 Team's junior programme, after impressing in her initial seasons racing in karts and showing encouraging signs of a driver on the rise. She started racing in 2017 and has been travelling around Europe competing in various series since 2019.

When she started racing, she attended the 'programa mujer y motor', a programme started by the Spanish Automobile Federation to attract more females to motorsport. She then rose up the ranks of Spanish karting in the Alevin category, before stepping up to larger events in WSK and IAME Euro series, reaching the final in almost all races.

In 2021, the Spanish-British racer mostly focused on competing in the 60 Mini category, building up experience and also won the IAME Euro Series in X30 Mini. She'll compete in the OK Junior class for 2022.

Daniel was born in the United Kingdom in 2006 and is a new signing to the Mercedes F1 Team's junior programme ahead of the 2022 season, after a strong couple of seasons competing in karts.

He comes from a racing background, with his father and grandfather competing, and they introduced him to karting. Since 2016, he has been working his way up the karting ladder and started competing at a national level in 2018, where he was vice British champion in the Honda Cadet class.

For 2022, he moves into single seaters with Argenti in the British F4 series.

Alex was born in Miami, Florida, in 2007 but is a native of Jamaica. He made his karting debut in 2015 and has made quite a name for himself on the karting scene already, over the last few years. Racing is in his family's blood, as his father, John, is a veteran rally driver who achieved success in the Caribbean.

Having started racing closer to home in the Caribbean and USA, he stepped up to competing in Europe in 2018, claiming the WSK Final Cup title in the 60 Mini class. Alex officially joined the Mercedes junior team in 2019, where he went on to win the ROK Cup Superfinal (Mini ROK) and 24° South Garda Winter Cup (Mini ROK) - to name just a few of his highlights from the season.

Alex then stepped up to OK Junior and Junior ROK categories for the 2020 season and remained in OK Junior racing in a number of different international series in 2021, finishing P2 in the WSK Euro Series and P3 in both the WSK Super Master Series and WSK Final Cup - where he competed in OK. He'll move up to OK full-time in 2022.

Frederik was born in Vejle, Denmark, in 2002 and joined the Mercedes junior team for the 2021 season. After claiming back-to-back Danish Karting Championships in 2013 and 2014, in the Cadet Junior and KFJ classes, and winning the WSK Final Cup in KFJ in 2015, Frederik moved into single seaters the following season in Formula Ford Denmark, finishing P4 with two wins.

For 2017, he switched to the Danish and ADAC F4 categories, finishing runner-up in the former, and remained in the ADAC series for 2018 (finishing P4) while also joining the Italian F4 grid. Frederik progressed to the Formula Regional European Championship with Prema for the following season, taking the title with 13 wins from 24 races. In 2020, he finished fourth in the FIA Formula 3 Championship with three wins.

For 2021, Frederik remained in Formula 3 for a second season, moving from Prema to ART Grand Prix, and finished fourth in the standings with one win and four further podiums. In 2022, Frederik moves up to Formula 2 with ART Grand Prix.