Button confident Hamilton will be on the 2022 grid 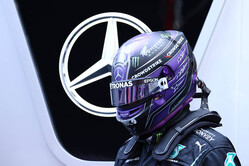 Jenson Button believes his former teammate, Lewis Hamilton will be on the grid this season.

It is now around six week since anything was heard from the seven-time world champion.

While the Daily Express gives almost hourly updates on his plans, his thoughts his frustration and his resentment, the reality is that the seven-time world champion is keeping his own counsel while the rest of the F1 world ties itself up in knots.

Speaking on breakfast TV this morning, Jenson Button, who was Hamilton's teammate for three seasons at McLaren, said that he is confident that his fellow-Briton will be on the grid this season.

"I really do hope he'll be racing," he told Good Morning Britain.

"I think he will be racing and he wants to win that eighth title to be the most decorated Formula 1 driver in F1 history," he added. "And he will do that. I really do think so."

Of course, the uncertainty, as the Daily Express never stops reminding us, is down to the shambles that was Abu Dhabi.

While Hamilton has maintained a strict radio silence ever since, other than following his Knighthood ceremony at Windsor Castle, the only semi-official word has come from Mercedes boss, Toto Wolff who regularly plays to the gallery (and tabloids) by suggesting his fears.

Of course, the reality is that the longer this goes on the less likely that Hamilton will walk away, for, if anything else, if Mercedes knew anything to the contrary the driver market would be in upheaval. Then again, that might explains some of the friendly agreements between teams over staff movements in recent weeks.

Unlike many fans who have lost all faith in the sport following the events of 12 December, Button is looking forward to the new season.

"It was a controversial end to the season," he admits, "but I think you've got to look at the season as a whole.

"F1 is in an amazing place, two fantastic drivers going at it every weekend. And I think everyone's excited about the new season. New regulations, and it's all about the development of these cars through the year."