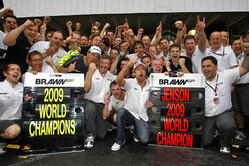 Confident that any loopholes have been well and truly shut down, Ross Brawn deems it unlikely that there will be any 2022 repeats of his 2009 title-winning innovation, the double diffuser.

Rejecting offers to put down his fishing rod and return to the F1 paddock as a team boss or technical director, Ross Brawn was finally made an offer he simply could not refuse.

In a classic case of poacher turning gamekeeper, the Briton was lured back to the sport as its technical chief, charged by his F1 bosses to level the playing field and improve the racing.

Despite the best efforts of the pandemic, this season we finally get to see the fruit of Brawn's labours, as the biggest overhaul of the sport's regulations becomes reality.

We say poacher turned gamekeeper because in his time Brawn has gained a reputation for, let's say, pushing the spirit of the rules to the absolute limit, never more so than in 2009 when his double-diffuser took Jenson Button to the drivers' title, while claiming the former Benetton and Ferrari technical chief's eponymous team the constructors' version.

The fairy-tale of 2009 was all the more special because at the end of 2008 Honda had rocked the sport by withdrawing, leaving Brawn and Button high and dry. However, Brawn bought the team, and with the aid of the double diffuser designed on Honda's watch (and money) went on to make history.

Now on the other side of the fence, figuratively speaking, Brawn is confident that the 2022 rules overhaul will do the job it is intended to do. Furthermore, as a former poacher, he is confident that there will be no surprises, no equivalents of the double diffuser. Indeed, he is pretty sure he and his team have shut down every avenue in terms of potential loopholes.

"When I was a technical director, it was the odd occasion when a team would come up with an interpretation," he tells the New York Times. "It was quite extreme in terms of when that happened. It didn't happen every day of the week.

"Trying to anticipate every loophole, or every interpretation, is very difficult," he admits. "But for sure, our process was to understand the problem and design around eliminating the problem.

"Our group spent some time looking at the sensitivities of the different areas, to see where there could be some scope left for the teams to evolve their designs and change their designs. Then we had a rule-busting phase where we did try and break the rules and see what loopholes we could find. We went through that.

"I won't pretend we would've found every loophole," he admits. "But we definitely went through a regulation testing phase of seeing where we could find some opportunities."

Asked if he expects a double diffuser-type innovation to appear at pre-season testing or at the season opener in Bahrain, he replies: "I don't think so, no," before adding: "But you never know. Nobody expected it before it happened."