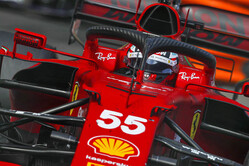 Ferrari's Laurent Mekies warns that the budget cap will limit the amount of updates teams can introduce over the course of the season.

It seems that before a single car has been revealed, far less a wheel turned, teams are preparing fans for the negatives.

The latest is Ferrari, where sporting director, Laurent Mekies warns that the budget cap will mean fewer updates to cars over the course of the season.

Previously we have seen teams introduce updates almost on a race-by-race basis as they battle for position, but the budget cap, finally introduced last season is likely to mean an end to that.

With this is mind, and in the face of the rules overhaul, Mekies warns that teams will have to be far more selective in terms of where they spend their money, and this is most likely to be reflected in upgrades, certainly in the latter stages of the season.

"Not compared to this year," he is quoted as saying by Motorsport.com, "because this year obviously was near zero, or at least for us was very little, but if you go back to 2019, 2018, we think you will see less.

"In 2018, 2019, in the big teams, you had something every race on the car or every other race," he continued. "It sounds difficult from our perspective to have a high number of updates with the constraints that we have.

"You need to keep a budget to develop during the year, because you will learn more and more, and therefore you will need ways to adjust," he admits. "This has been the biggest challenge.

"That's effectively what we do now. How much of a challenge it is depends on your level of competitiveness to the others."

Much will depend on pre-season testing, which gets underway at Barcelona late next month, warns the Frenchman, as the teams get the first clues as to how they measure up against the opposition and where improvements need to be made.

"If you have a big issue at the beginning of the year and nothing is correlating and so on, you may invest some of your package two or package three money," he says. "You need to fix it now, so you take your parts, you put them into the bin, and that's the way you will deal with it."