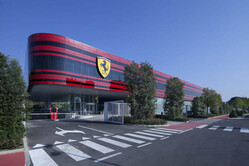 Vigna, though announced last June, didn't take up his post until September, and the newly announced reorganisation of the company is the first indication of how he aims to take the legendary Italian manufacturer forward.

Prior to his appointment, Vigna was with STMicroelectronics, where he was President of its Analog, MEMS (Micro-electromechanical Systems) and Sensors Group, STM's largest and most profitable operating business. He was also a Member of the group's executive committee.

"We're delighted to welcome Benedetto Vigna as our new Ferrari CEO," said Ferrari chairman, John Elkann. "His deep understanding of the technologies driving much of the change in our industry, and his proven innovation, business-building and leadership skills, will further strengthen Ferrari and its unique story of passion and performance, in the exciting era ahead."

Indeed, Vigna, who was appointed following the sudden resignation of Louis Camilleri in December 2020, has brought two STM executives with him, Ernesto Lasalandra is to be the company's chief research and development officer, while Angelo Pesci is appointed chief purchasing and quality officer.

Gianmaria Fulgenzi, who has been with Ferrari since 2002 and has run the supply chain department for the racing division, is to be the new chief product development officer.

Chief technology officer Michael Leiters and chief brand diversification officer Nicola Boari leave the company - Boari having overseen the creation of the company's in-house fashion brand, which will now be overseen by Vigna himself on an interim basis.

"The new organizational structure will further foster innovation, optimize processes and increase collaboration both internally and with partners," said Ferrari in a brief statement.

Interestingly, no mention is made of former FIA president, Jean Todt who had been linked with a consultancy role at the company he led to numerous titles.