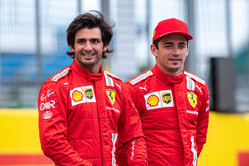 Ferrari has become the second team to announce when the wraps will come off its 2022 contender.

The Maranello outfit will reveal the car, the chassis designation of which has yet to be confirmed, on Thursday 17 February, a week after Aston Martin reveals its contender, and just six days before testing gets underway at Barcelona.

Even before the pandemic, launches had become a somewhat low-key affair with many teams opting to reveal all in the hours before testing got underway, however Ferrari remained one of those few teams still seeking to add a little pre-season flair.

Following the disaster of 2020, the result of the FIA's investigation into its (2019) power unit, the Maranello outfit restored some pride last year but remains some way off the fight at the front featuring Red Bull and Mercedes.

With Sebastian Vettel having lost his way in 2020, the arrival of Carlos Sainz kicked new life into the team, the Spaniard giving Charles Leclerc a good run for his money.

Like many of those drivers who changed seats over the 2020 winter, Sainz got off to a slow, challenging start, but then gradually found his feet.

Ironically, things began to turn around for the Spaniard at his teammate's home race, Monaco, where, having taken pole, Leclerc suffered a gearbox failure on his way to the grid. Meanwhile, a disastrous pit stop for Valtteri Bottas saw Sainz claim his first podium for the Scuderia on only his fifth appearance.

At Silverstone Leclerc looked set to pull off a remarkable win until he was passed in the closing laps by Lewis Hamilton, nonetheless the second half of the season saw a remarkable run of point scoring success that meant the Maranello outfit was able to comfortably hold off the challenge from McLaren.

Other than fears that the Italian team may have concentrated too hard on its 2021 efforts, at the cost of its 2022 challenge, Ferrari has one of the strongest driver pairings on the grid.

However, looking at the strengths of the Maranello squad, certainly compared to the likes of Mercedes and Red Bull, it is unlikely that it will be challenging for title honours any time soon.

With the Italian media and the tifosi on its back, the good news for the Italian team is that a recent reshuffle sees Mattia Binotto remain in charge, thereby giving it some much needed consistency as it works on overcoming the 200-plus point gap to its rivals.