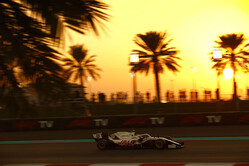 Round 22 of the 2021 FIA Formula 1 World Championship began with practice on Friday at the Yas Marina Circuit as teams prepared for Sunday's Abu Dhabi Grand Prix - the season finale and championship deciding round.

Schumacher and Mazepin shared identical run plans for the final FP1 of the season - starting with a wake-up stint on the Pirelli P Zero Yellow medium tire followed by a baseline run on the Red softs. The session concluded with a high-fuel outing returning to the mediums. Fastest laps were set on the soft rubber with Schumacher posting a 1:27.698 for P19 while Mazepin was P20 turning a 1:28.305 lap.

FP2 saw the lights around Yas Marina fire into life. Lap times dropped as the evening session played out -Schumacher and Mazepin recording their fastest times on their qualifying simulation runs. Armed with fresh sets of soft tires, Schumacher logged a 1:25.784 for P19 with Mazepin's best effort a 1:26.336 for P20 on the timesheets. Low and high fuel runs on the medium and soft compounds rounded out the run program.

Nikita Mazepin: "I like Abu Dhabi - I like this track and obviously it's got a slightly modified layout this season. It was interesting to get a few laps in and it was quite smooth with no issues, just working on the set-up as a standard first-time Friday. I loved Abu Dhabi the way it was - it had 21 corners from what I believe, and now it has 16 so it's a slightly shorter track that I love but nevertheless I think it's a good one."

Mick Schumacher: "Overall, it went well - I got to learn the new track which is a bit different to before but in general it hasn't changed much. It has the same philosophy in terms of approach to some of the corners although obviously the corner itself is very different. It's dark, we have all the lights on, so it's different and I enjoy driving here. There are different lines you can take, especially at T9, so I think there will be variations over the lap and overtaking should become easier. I think we're closer than we were at the beginning of the year with those ahead."

Guenther Steiner: "It was really the Friday practice we needed with a pair of relatively uneventful sessions, but that's a good thing. FP1 isn't usually that representative here but we got plenty of laps in at least. FP2 in the evening was really a case of more of the same. We completed our run plans with Nikita and Mick with both getting their first real-world taste of the revised layout. It's our final qualifying of the season tomorrow - I'm not expecting any change to our pace, but we'll be pushing hard as we have done all year long."