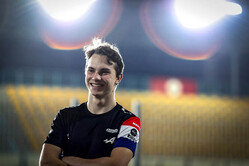 Alpine's 2022 reserve driver, Oscar Piastri will make his debut with the French team at next week's Young Driver test.

The Alpine Academy driver will begin his transition to the next level of global motorsport at the end-of-season Young Driver Test at the Yas Marina Circuit, with a day behind the wheel of the race winning A521 car driven by Fernando Alonso and Esteban Ocon this season.

Alonso and Ocon will also be on track post-season as they get to grips with the new 18" Pirelli tyres in the two-year-old R.S.18 during two days of Pirelli tyre testing. Ocon will get behind the wheel on day one with Alonso taking over for day two.

"I'm very excited to drive in the test," said Piastri. "It's almost like my first official day in my new job for next year when I become the team's reserve driver.

"Any day in an F1 car is pretty special but to drive the current one with other drivers on track in a somewhat competitive environment is very cool. Thanks to the team for this opportunity, I'm certainly looking forward to it and working through a very full testing programme on the day."

"Oscar has had a fantastic Formula 2 season this year, again showing his class," added Alpine CEO, Laurent Rossi, "and this test appearance is well earned.

"This test will be part of Oscar's ongoing development as he prepares to become the team's Reserve Driver for 2022, to aid and assist Fernando and Esteban and our development teams on and off the track.

"In parallel, as Oscar gets up to speed with the current car, we will already be looking forward to 2022 with our current drivers as they experience the new 18" tyres for next year. It's a good opportunity for us to learn in preparation for the challenges of the next year on all fronts."