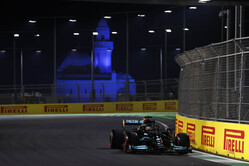 Hamilton will start the race on the P Zero Yellow medium tyres tomorrow, having used these to set his fastest time in Q2. This was the most popular choice for the Q2 session, with nine of the top 10 drivers on the grid starting on this compound in order to target a one-stopper. Five drivers ran the soft in Q2, but only McLaren's Lando Norris set his fastest time on this compound.

The track offered plenty of grip from start to finish, with a good degree of evolution during the course of qualifying, as the rapid times on the medium tyre in Q2 proved.

Conditions throughout qualifying were similar to how they had been in free practice, with around 30 degrees ambient and on track, remaining consistent throughout the session.

The 50-lap Saudi Arabia Grand Prix should be a one-stopper. The fastest one-stopper should be from P Zero Yellow medium C3 to White hard C2, which the majority of drivers look set to select - as can be seen by nearly all the frontrunners who chose to get through Q2 on the medium compound. Starting on the medium gives more options as it leaves the door open to either a one or a two-stopper, and it also enables drivers to run a relatively long first stint, with a wide pit stop window. An alternative is a soft to hard strategy, which is just as quick on paper but might need a little bit more management, depending on the car.

A two-stopper is distinctly slower, but the fastest should be using all the compounds: one stint on the medium, followed by one on the hard and the last on soft.

However, it might not be as straightforward as that. With Jeddah being brand new circuit, there are still a number of unknown factors to consider: and one of them might be the seemingly high probability of a safety car - as is the case at any street circuit with little run-off area. If that's the case, then it could make a 'free' pit stop possible.

Mario Isola: "With this being the second-longest lap of the season, the teams and drivers had a relatively limited window of opportunity to get it right, in terms of preparing for a flying lap. The medium tyre was favoured by nearly everyone in Q2, with Lando Norris being the only driver to start on the soft in the top 10. It's going to be fascinating to see what he can do, surrounded by so many cars starting on mediums. The two fastest strategies on paper are medium to hard or soft to hard, but the latter needs a bit more careful management. So we expect the majority of drivers to target a one-stopper but there are many unknown elements that could influence the strategy. Despite the length of the lap the margins were incredibly close, with 10 drivers covered by just a few tenths of a second on this brand new circuit."