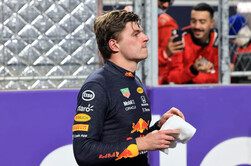 As if it wasn't tense enough, since the end of FP3 the stewards have issued Lewis Hamilton with two summons, one in respect of a waved double yellow infringement a la Max in Qatar, and the other for allegedly impeding Pierre Gasly.

This follows a significant turnaround in fortune in final practice when Max Verstappen set the pace.

While some are claiming Mercedes might have turned their engines down, the fact is that both drivers were struggling to turn on their tyres.

Meanwhile, Red Bull, which suffered yesterday, had no such issues and Verstappen and Sergio Perez finished first and third, with their AlphaTauri buddies fourth and fifth.

As if that wasn't enough, after finding a fuel leak on Valtteri Bottas' car, Mercedes opted to change the Finn's power unit. However, as it was for a unit from his pool there will be no penalty.

Once again, the Ferraris looked strong as did the Alpines, while Aston Martin was clearly struggling.

As feared, traffic is proving to be an issue here, and this combined with the high speed differentials is causing great concern. Indeed, despite the insistence of some TV pundits that 'all is fine', the two incidents involving Hamilton in FP£ highlight the potential for disaster.

With an eye on traffic, drivers will be keen to secure an early banker lap this evening, particularly in Q1 and Q2 when there are more cars on track.

In the minutes before Q1 the stewards announce that no further action will be taken over the yellow flags infringement.

However, as the stewards debate the impeding charge, work continues on Bottas' car which doesn't look as if it is going anywhere, anytime soon.

The lights go green and as expected there is a long queue at the end of the pitlane with Gasly leading the way.

"It's going to be a mess in the last sector," warns Leclerc.

Hamilton is among the first out, joined, unbelievably, by his teammate.

In no time at all, all 20 drivers are on track.

Ricciardo goes third, ahead of Ocon and Giovinazzi as Hamilton makes a mistake in Turn 1.

On a hot lap, the world champion subsequently closes on another driver on a hot lap and has to abort.

Sainz goes third and Bottas fourth, though both are demoted when Perez posts a 29.039 to go second.

Indeed, as the track continues to evolve the order is ever changing, with Norris going second and Ricciardo third.

Such is the way the track is evolving, Verstappen has slipped to seventh, as it appears that most will need to make a second run.

Bottas goes quickest in the second sector, finally crossing the line at 28.057 to go top.

With 5:20 remaining, both Aston Martins are in the drop zone, as Verstappen complains of a "terrible first sector".

Perez goes quickest in the first two sectors, finally crossing the line at 28.021, and while Bottas goes quicker in S2 he subsequently aborts the lap.

Verstappen goes quickest in S1, going on to post a PB in S2. However, he has to abort the lap in the final sector as he encounters the traffic jam from hell in the final corners.

"I have a misfire," reports Bottas, who then stops at the pitlane entrance.

While Giovinazzi goes 13th, both Aston Martins fail to make the cut.

Phew, that was manic.

"What? Oh man," declares Vettel on hearing he finished 17th.

As the cars head out for Q2, most are on mediums. Despite his earlier issues Bottas is among the first out.

Moments later Leclerc splits the Bulls with a 28.612.

Norris goes fourth, ahead of Russell, Raikkonen, Sainz and Hamilton, who posts an exploratory 27.730.

Next time around the world champion posts a 28.715 to go third.

Sainz is the first to have a time deleted after the Spaniard exceeded the track limits at Turn 4. What track limits?

"I don't know what we're doing, I have no grip out here," complains Hamilton.

There's a great cloud of dust thrown up when Sainz spins at Turn 11. As he heads back to the pits you can see the Spaniard has incurred rear wing damage.

Both Alpines are currently in the drop zone, as is Sainz.

As Hamilton improves to second with a 28.068, Perez goes quickest in S1.

As the Mexican goes quickest (27.946), Norris, currently 12th, is the first to blink and switch to softs.

Russell improves to 12th as Tsunoda 5th. Moments later Norris goes seventh with a 28.344. "I got held up," complains the Briton.

Meanwhile the stewards are to investigate a Q1 incident involving Gasly and Sainz.

As Hamilton posts a PB in S1, Verstappen heads out on fresh softs.

With insufficient time to fit a new rear wing, Sainz' existing version is given a hasty repair. Back on track the Spaniard does well to avoid a nasty incident as he tries to improve.

While Sainz fails to post a significant time, both Alfa drivers are involved in late incident. Raikkonen touches the Mercedes of Bottas, while teammate Giovinazzi gives the wall a clout with his rear wing.