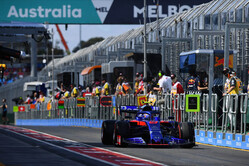 Having previously expressed an interest in running the Sprint format in 2022, Australian GP boss, Andrew Westacott admits that this is unlikely to happen.

Fingers tightly crossed, F1 will return to Melbourne in April following a two year absence, and having undergone extensive modifications aimed at improving the racing it was thought that another means of welcoming Australia back to the schedule would be by featuring the Sprint format.

"I'm going to be talking about it with Formula 1 during November," Australian GP boss, Andrew Westacott told Speedcafe.com in October. "It's not something that I've had dialogue, the most important dialogue was getting agreement and making sure that everything was there for the calendar."

However, while it is anticipated that the Sprint will feature at a minimum of 6 of next season's (record) 23 events, Westacott doesn't believe Melbourne will be one of them.

"They haven't finalised the number nor the locations of the sprint formats for 2022," he tell Speedcafe.com.

"But it looks highly likely that we will retain the standard format of FP1 and FP2 on Friday, FP3 and qualifying on Saturday, and the race on Sunday afternoon.

"So fans, if they're looking for Sprint formats, would have to be looking at either on some of the European locations or on broadcast, but it's not likely to be in Melbourne for April."

However, he doesn't give up hope of Melbourne featuring the new format in the future.

"As a promoter, I really want to make sure that we've got the best and most complete entertainment package on track," he says. "I'm open minded at the moment and I'm very supporting of Formula 1 looking at the right solution for race promoters and the entertainment.

"Over time, I'm sure they'll come up with something, I'm just open minded and content with having the GP and having the current format."

Other than the extensive modifications, which include widening the pitlane, resurfacing the entire track, modifying the chicane at Turn 11/12 and tightening the right-hander at Turn 13, all with the aim of aiding overtaking and increasing lap speeds, Westacott is also anticipating the new generation of F1 cars.

"It's going to change the racing, it's going to change, obviously, the pecking order a bit," he says. "They'll shake down things technically in race one and race two – we're going to see things on a new track with new cars with a lot of new drivers for the first time in Melbourne.

"We hope for a new speed limit in the pit lane and probably four DRS zones, so there's going to be a lot to get their mind around. They're not going to know much about the asphalt from a simulator point of view, so it's going to be interesting."