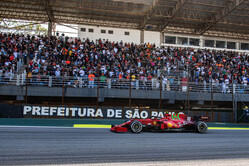 Another solid weekend for Scuderia Ferrari Mission Winnow, scoring 18 points this afternoon courtesy of a fifth place for Charles Leclerc and a sixth for Carlos Sainz. It means the team makes a significant step forward in terms of the Constructors' classification, as its lead over McLaren has extended to 31.5 points.

The race had been planned out to the smallest detail with the aim of getting both cars behind the two teams fighting for the titles. The strategy and pit stops were well executed and the drivers did an intelligent job of tyre management, pushing when they had to, without making any mistakes. The SF21 worked well on both the Medium and Hard compounds, running at a reasonable pace, capable of maintaining the positions gained in the opening laps.

The trio of races in the Americas saw a positive trend for the Scuderia which will allow it to tackle the final three Grands Prix in the Middle East knowing it can fight right to the end for third place, which is the realistic goal for this final part of the season. Two of the remaining three races take place on tracks that Formula 1 has never raced on before, so preparing well for the weekends will be even more important, as will be reliability, always a crucial factor.

Charles Leclerc: That was a really nice race. We weren't satisfied after the Sprint Qualifying yesterday, so we worked hard last night to analyse where we could make some improvements. And that's what we applied today, so I am very happy with the performance.

I had a very good start, which was my first target. After that, the race was all about managing the tyres well and maintaining the gap to those behind me.

It's also looking good in terms of the gap we are building to our direct competitors in the championship, so overall, a very positive finish to the weekend.

Carlos Sainz: I cannot be happy with today's result as I think if I had made a clean getaway from the line it would probably have ended with P5. We need to keep digging into that to understand what was the cause, as we are lacking consistency off the line. I then had contact with Lando (Norris) and that ended up costing me positions to Checo (Perez) and Charles. From there, the pace was strong the entire race, but that was it.

There are a lot of positives to take away from this weekend. First of all the points that we were able to collect as a team to extend the lead over McLaren and secondly the good feeling with the car, the tyre management and the strong pace since Friday. It's just frustrating that I haven't made the most of the last two races after eventful starts, but we'll keep pushing! On to the final race of this triple-header.

Mattia Binotto, Team Principal: A good result in terms of the championship, given that we have doubled our lead over our closest rivals in the Constructors' classification. Having said that, a 31.5 point lead doesn't mean that it's done and dusted, far from it. We know the situation can change in an instant and that our opponents are very strong.

During what proved to be a busy weekend, the team, both at the track and back in Maranello, worked very hard and with great precision, tackling every situation with the right approach. Today, every aspect of the race was managed well - strategy, tyre management and pit stops - and the drivers produced a clean and effective performance.

There are now just three races to go and we must continue in this fashion to reach what has become our goal for the end of season.