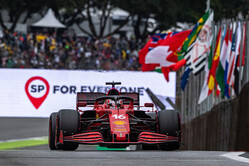 Scuderia Ferrari Mission Winnow produced a solid qualifying performance at the Interlagos circuit, with a sixth place for Carlos Sainz and a seventh for Charles Leclerc. They thus start tomorrow's Sprint Qualifying from the third and fourth rows.

The main aim this weekend is to stay ahead of the team's closest rivals in the Constructors' standings and, at least from what could be seen on a single flying lap, that has been achieved. As simulation work prior to the event had predicted, it was very close behind the two top teams, with five cars - two Ferraris, two McLarens and an AlphaTauri - covered by just 262 thousandths of a second, a similar scenario to that seen last week in Mexico City.

Now it's time to prepare for a race run in two parts, the first tomorrow afternoon over a single 24 lap stint and the second on Sunday over the usual 71 laps. Carlos and Charles will be looking to make the most of any opportunity to make up places, but most of all, they will be aiming to keep their positions ahead of the McLaren duo.

Carlos Sainz: It was a positive qualifying today as I keep improving my driving style and the feeling with this car at all types of tracks and in all conditions. I am performing more consistently in qualifying and today was a good day.

The only downside is that the AlphaTauri seems to have a bit more pace, so the aim for tomorrow is to try and beat Pierre Gasly and lead the chase to the teams ahead. A clean race tomorrow is key to have good chances on Sunday, so we'll make sure we are in the best possible position to maximise the weekend.

I want to thank the entire race team for staying up late and doing such a good job yesterday night to give us a competitive car today. On to tomorrow!

Charles Leclerc: We're going to do everything we can to maximise our potential for tomorrow's Sprint Qualifying, which will be the final one of this season.

To start from 6th and 7th is a solid job from the team, and even though I had higher expectations for myself, what is most important for us is that we kept our direct competitors behind us today. Q3 was tricky. I did my first run on used tyres which was not ideal for getting into a rhythm, and on the second run we didn't extract everything from the car.

We still have some work to do and will push to bring home good results tomorrow and, even more importantly, on Sunday.

Laurent Mekies: Not a bad qualifying in terms of helping us achieve our goal in this final part of the season, namely to finish third in the Constructors' championship. Today it was important that we managed to get both our cars ahead of those of our closest title rivals. It would have been nice to have got ahead of Gasly in the AlphaTauri too, but we knew that on this track they would be very competitive, as was the case in Mexico.

It's always very close behind the two top teams and it takes very little to lose or gain several places. Today with Charles, we paid the price for not having two sets of new Softs for Q3 while all the others did, as he had to use an additional set in Q1 and details like this can make the difference when the gaps are so small.

Finally I'd like to congratulate the whole team for their work over the past two days. It was not easy condensing the job of setting up and preparation which usually takes two days into just 14 hours, but everyone did their bit in a well organised and determined way. It meant that today everything ran smoothly, just like a normal day.