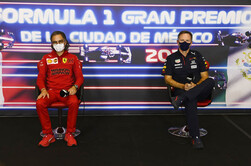 It's a very vibrant atmosphere out there, so let's start with a question to both of you: thoughts on racing in Mexico after two years away.
Christian Horner: It's great to be back, and great to be back with a Mexican driver as well. The reception that the team have had, we've been out here for a few days now, we did a running show car demonstration earlier in the week and just the enthusiasm for Formula 1, for Checo, for the team, has been fantastic. They're such passionate people and it's such a fantastic venue with the atmosphere, with the stadium section and so on. I'm expecting a lot of noise over the course of the weekend.

Laurent Mekies: It's fantastic to arrive here after Austin. I think we all got nicely shocked by the 400,000 people in Austin, it reminded us how great it was a couple of years ago and you come here and you feel the same warmth. You're just waiting to see the stadium completely full tomorrow and the next day. We certainly missed it and we hope to see many of those now.

Christian, let's come back to you. Five races to go, what's the mood in the camp?
CH: The mood in the camp is good. It's upbeat, it's really enjoying this championship and I think, coming off the back of Austin, it was a big result for us, a big win, a double podium there as well, so there's everything to play for in both championships. Five to go, still a lot of points on the board, a lot that can go right and can go wrong but the fact that we've got ourselves into this position, the whole team has worked incredibly hard, not just trackside but behind the scenes, and what's going on in the factory, the long hours and, under difficult circumstances at times with the whole pandemic this year but yeah, it's exciting, we're loving taking this title challenge on.

The team has a fantastic record here in Mexico. How confident are you, coming into the weekend?
CH: Well, you look at the record, we've won as many races as Mercedes have here, so we've always performed reasonably well here, and we've had a couple of victories but, as I said, this year, the form book, you can throw out of the window because the difference between the two teams has been so tight at pretty much all of the venues that we've been to so far. I see no reason for that to be different here. It's going to be about getting everything right on the day, nailing qualifying, getting the start, the right strategy, the right reliability and doing all the basics well. That's going to be crucial at this phase of the championship.

What did you make of the Mercedes 1-2 in the first practice session?
CH: We can see that they ran a little bit higher power on their performance laps and it's a trait that we saw them do again in Austin a couple of weeks ago. So, I think a positive first session for us, I think there's areas of the car that we can improve, it was very dirty and dusty, you can see it's still a little way off the pace we were doing a couple of years ago in the equivalent session. So there are areas we can improve, things that we can make the car perform a bit better around here and it's a question of going with the circuit as it rubbers-in, as it cleans up, because it's not used a great deal, that's going to be a key factor.

Now Christian, can I put a scenario to you? It's Checo's home race, it's leading on Sunday and Max Verstappen is second, would you deny Checo victory in his home race?
CH: That's an incredibly tough one. Our main objective is to win both Championships, and both drivers know the task involved to achieve that - but of course so many scenarios, what-ifs, can happen. It will depend where our opponents are. You can't rule it out, you can't rule it in. Our preference would be to see Checo, if Checo were in that position, to win his home race. There's no bigger result for any home driver - but as a team, we have to keep an eye on both of these championships and know what's at stake. This race like any other has the same amount of points attributable to it and therefore we treat it like any other race.

This World Championship fight is being fought on and off the race track. Do you think that's inevitable? Toto Wolff and you are often exchanging blows in the media. He even described you earlier this week as a protagonist in a pantomime. What's your reaction to that?
CH: Yeah, look, we all know Toto has a lot to say. I was quite flattered actually, I mean, going called a protagonist, if you look at what the definition of that means, I think you also need an antagonist to have a protagonist. One could say that perhaps Toto fulfils that role pretty well - or if it were a pantomime then the pantomime dame role might suit him but look, it's all about what goes on, on track. I think it's a great competition between the teams, it's no-holds barred, pit walls going against pit wall, drivers against drivers, engine suppliers against engine suppliers, chassis against chassis. It's fantastic. We're loving it and occasionally you're going to get some flak thrown at you - but take it with a pinch of salt and sometimes even as a compliment.

Laurent, Charles was pretty confident yesterday about the car's performance here in Mexico. Do you share his optimism?
LM: I don't know if you can call it optimism. I think what we see is that the performance is getting more consistent, so the results are coming, also in a more consistent way. So we come to a race track and have a better idea of where we are going to stand. I think it gives everybody a better feeling about how to go about the weekend. I think you can see it with Charles, I think you can see it with Carlos, you can see it with the team. It gives more confidence to work on the next steps. I think altogether, a little bit like between Red Bull and Mercedes, we know it's always going to be a matter of going and getting the last few hundredths and few tenths to be topping the midfield honours - but you know you are going to be in that fight, and I think that's what Charles and Carlos feel now.

Going to be in the fight - but do you think you can mix it with Mercedes and Red Bull here?
LM: No. I think the gap to Red Bull and Mercedes is too big. It doesn't change the focus on our objective, which is to try to get to just behind them. This is what we are concentrating on and it still involves the chasing of every single bit of performance we can, and that's what the boys are trying to do.

Now what about this battle for P3 in the Constructors' Championship with McLaren. The gap is down to 3.5 points. How confident are you of getting that position now?
LM: It's a very good fight, McLaren have had a very strong season. They had a great win in Monza, it's a team that is pushing very hard and you know we are happy to be in that fight. We don't forget where we were last year. So, the fact that we have managed to reconstruct to the extent that we can be in that fight today is a good testimony on the progress made by the team on that reconstruction. Now, the path is very long to get to where we want but we think we will be in the fight until the very last races. It will be, again, who is going to leave a little bit more on the table than the other one - but we think it is very good training for the team. Hopefully we will be in bigger battles in the future and what it means is we need to be able to be at ease in these battles, to operate under pressure and to perform under pressure - and I think for that, as a team, we take it as a fantastic challenge to get to the next step.

Fantastic challenge but what does P3 mean to Ferrari?
LM: I think it means turning into facts the progress that we are trying to make, and that we believe we are making, so that's what it is all about in the end.

What about the battle between your two drivers. They're only separated by 5.5 points. Carlos described it yesterday as tense and too close to call. How would you describe their battle?
LM: I don't know if we can call it a battle. Of course these guys are very, very competitive as they should be but I think we are enjoying at the moment a level of interaction between our drivers and between our drivers and the team that is at a very high level. We try to build on that advantage. They are pushing very hard, pushing not only each other very hard but the team very hard, always with the right spirit and we think that's it's something that is giving us lap time and will give us more lap time in the future - so I don't think that battle will change anything to the spirit that is driving all of us and altogether I can confidently say they are more focused on getting the team to third place than on their own fight.