"They're quicker than us... at the moment," admits Hamilton 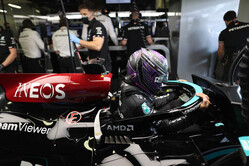 World champion blames lack of downforce for difference in pace to Red Bull, while Christian Horner hints at sandbagging by the German team.

While Mercedes topped the timesheets in Friday's opening session, Max Verstappen set the pace in the afternoon, the Dutchman enjoying a 0.4s comfort cushion over the Mercedes pair.

However, as we saw in Austin, things can be turned around overnight, and even if the Autodromo Hermanos Rodriguez is seen as a Red Bull track, Lewis Hamilton isn't writing the weekend off just yet.

"We're giving it absolutely everything we've got," he said, "it's just that they're quicker than us at the moment.

"The car is generally feeling okay, we've not really had any major issues," he continued, "we've got no real concerns."

Asked about the difference in pace, he said: "We're just chipping away at our setup and trying to improve it, but we're lacking downforce which is probably why we had that half a second difference between us."

Hamilton comes into this weekend with a 12 point deficit to Verstappen in the drivers' championship with just five races remaining, meaning his hopes of claiming a record eighth title this year are starting to slip away."

"Starting the day, it was quite tricky with the low grip, it was quite a dusty track," added teammate, Valtteri Bottas. "It's why it was difficult to get a proper read of how the car really is.

"I thought it was not far off from what it should be and we could fine tune it for FP2 and it didn't feel too bad," he added. "But there's still definitively lap time we need to find because Red Bull seems to be quick.

"They definitively seemed quicker today, at least on the single lap. They have really strong pace on the soft tyre, so we need to find a bit of lap time if we want to fight for the pole."

However, no doubt recalling how his team turned things around two weeks ago, Christian Horner isn't writing off his German rivals just yet, suggesting Mercedes is holding back in terms of power.

"Mercedes have still got a bit in their pocket, so I don't think we've seen their full potential yet," he told Sky Sports. "During the session we have a bunch of analysts back in Milton Keynes and you can see from the GPS overlays when they turn up the engine and when they turn it down.

"They'll be doing the same to us," he added. "So you can monitor what they have in the pocket and what they don't have."

As for his own engine...

"The engine's working well at this altitude," he said. "We're running Monaco wings, but have Monza downforce because of the thinness of the air up here. We found a reasonable balance today.

"It's a track that has suited our car over the last few years," he added. "But we've seen all year there's been less than a tenth between the cars, and we're expecting that to be the case again."