Drivers will be free to speak their minds in Qatar 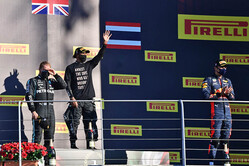 Qatar boss assures drivers that they will be free to "speak their minds" at the forthcoming Grand Prix, insisting that they are "free to say whatever they want to say".

With many already objecting to Saudi Arabia's inclusion on the F1 calendar - something that even Ross Brawn was saying wouldn't happen as recently as 2018 - the news that Qatar was also to be brought on board caused many to question the sport's attitude towards human rights.

Though the sport constantly assures us of its dedication to human rights through its various initiatives, including We Race As One, many question how this sits alongside the questionable records of nations such as Saudi Arabia and Qatar.

Brought in to replace the cancelled Australian Grand Prix, before a wheel had even turned at the Losail circuit a ten year deal had been agreed which will see Qatar join the schedule from 2023.

With many wondering about the reaction should drivers seek to express their concern over human rights over the Qatar weekend, Abdulrahman Al Mannai, president of the Qatar Motor and Motorcycle Federation insists that this will not be an issue.

"We are happy to support the drivers to speak their minds on their platforms," he tells France's AFP. "We don't see it as an issue in Qatar because they're free to say whatever they want to say."

Following the controversial decision to award Qatar the World Cup, which takes place next year, and for which David Beckham was recently brought on board as an 'ambassador, in a reputed £150m deal, other than the country's reputation for human rights, there has been fierce criticism over the working conditions for those building the various facilities required for the tournament, with talk of over 6,000 deaths since work began ten years ago.

In response, Qatar has introduced a minimum wage of $1.30 (£0.95) an hour, while removing the rule that prevented workers from changing employers and also scrapping exit permit requirements.

"We're expecting it to be full," he said of next month's race, which precedes the Saudi Arabian and Abu Dhabi rounds, "because ever since we announced the Formula One the demand has been off the charts.

"We stepped in at short notice," he continues, "we wanted to help, but at the same time, we also wanted to have a long-term relationship with Formula One.