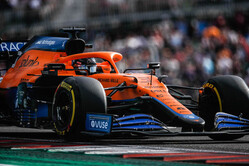 McLaren team boss, Andreas Seidl has praised Daniel Ricciardo's performance in the United States Grand Prix, claiming it was superior to his win at Monza.

It was certainly an interesting afternoon for the Australian who was involved in a feisty three-way scrap with Carlos Sainz and his McLaren teammate on the opening lap, and subsequently had to fend off the Ferrari for much of the remainder of the afternoon.

"I'm very happy with what he could pull off this weekend," he continued, "it was a great performance from his side today to keep Carlos behind the entire race and being under massive pressure."

"Carlos was putting pressure on me the entire race," said the Australian, "we actually had a really good battle the first lap. We went back and forth I think three times. I managed to get him and that set up my race and allowed me to fight for fifth so that was really important.

"And then a pretty good battle with him and let's say a strong defence," he continued, "which I needed to do to hold him off because I think realistically if he'd have got me, I'd have fallen back into Bottas and I think he probably would have had a much better chance of getting me as well so fifth could have quickly become seventh.

"I'm very happy to have got a top-five here in the great city of Austin, Texas," he grinned.

Indeed as they fought for position in the second half of the race, at one point they clashed, causing damage to the Ferrari which left Sainz not only unable to continue harrying Ricciardo but eventually left him defenceless when Bottas made his move.

"It's just another confirmation that since the summer break he continuously improved and felt more comfortable in the in the car, which is good," said Seidl.

"But at the same time, it was a great weekend from his side here in Austin, and a very strong drive to the end in the race where he showed why we wanted to get him onboard and get him to McLaren."

In terms of the battle with Ferrari for 'best of the rest', Seidl said: "We need to be absolutely happy with the outcome of today's race because I think we have maximised everything that was possible for us today, or even more. We finished ahead of one Ferrari while both Ferraris have been clearly quicker all weekend than us, so that's an achievement.

"To keep Valtteri behind in the race is also something which we wouldn't necessarily expect," he admitted. "So based on that, accepting the reality that Ferrari was simply a lot quicker this weekend than us, it was a well-handled race by the team, by both drivers, and we achieved what was on the cards for us today."