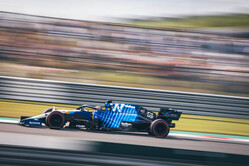 George Russell qualified 15th and Nicholas Latifi 17th for the United States Grand Prix. George progressed through to Q2, setting a time of 1:35.730 on the medium Pirelli tyre, which unfortunately was subsequently deleted for a track limits infringement.

Dave Robson, Head of Vehicle Performance: It was a shame that Nicholas suffered with some unexpected oversteer in the middle sector of his final lap as his overall pace was very strong and he could've easily made it to Q2 ahead of the Alfa Romeos. However, that is the nature of Qualifying and whilst it is frustrating, he will start the race in P14 after cars ahead serve their penalties. From there he can have a strong race and battle with Giovinazzi and Ocon. His pace today was excellent and there is no reason to think that he can't replicate that tomorrow.

With George, we knew that we were only competing with Alonso and Vettel and so once into Q2, we watched them and, in the end, with Vettel competing hard on his new Qualifying tyre, we opted to follow suit using a new Option tyre. George was on a strong lap and, approaching turn 12, it looked like he could beat Sebastian, however, some gusts in Sector 3 meant that he lost time. In any case, he slid off the track at turn nine and so his lap time was deleted. This was a pity and means that he will now start behind Alonso.

We now turn our attention to the Grand Prix, where we'll look to apply the lessons learnt yesterday during the high fuel runs. Looking after the tyres for a stint is not easy in the hot conditions, but we have found a few opportunities for improvement and we expect to be more competitive tomorrow.

George Russell: Today has been a much better day for us than Friday. We were struggling in the low speed corners yesterday but the wind direction changed today which has brought the car towards us. Progressing to Q2, it was all about battling with Alonso and Vettel to see who could start the furthest forward despite our grid penalties. On my final lap, I had a really strong first sector but unfortunately lost it a little bit at turn eight and nine. It was my first track limits offence of the weekend so it's a shame for it to happen in Qualifying but equally, it doesn't change too much for us. It will be a long race tomorrow, there's plenty of different strategy options on the table so let's see what we can do.

Nicholas Latifi: On my final flying lap I got caught out by some unexpected balance changes in the high-speed corners, the car snapped and I lost all momentum. I pushed hard for the rest of the lap, but the time I'd lost was unrecoverable unfortunately. It's frustrating as we should have been able to make it to Q2 today, but it just wasn't a great lap. The upturn in pace compared to yesterday was good, and our low fuel runs are much more competitive today so that's a positive. I do expect a tough race tomorrow with the high temperatures and managing the tyres, but everybody will be in a similar situation.