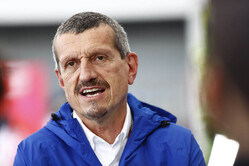 Fred, first up, more points for Kimi in Russia. Just how much of a shot in the arm was that for the team?
Frederic Vasseur: I think it was a good couple of laps for the team but I think we had tough events before. We did a good quali in Zandvoort and Monza but we were not able to score points. It was a shame, but in Sochi we achieved it. Now we have still seven or eight events to go and a lot of opportunities to score points and we are still pushing.

Well, seven or eight events to go, you're now 16 points off Williams, are they catchable?
Jost Capito: (Laughing) Of course.

Fred, how realistic is that?
FV: It's tough but for sure when you see the situation on the second part of the grid you need to have a chaotic event to score good points. The reliability of the cars is mega now and if everybody finishes the race it's difficult to score points but you know perfectly also that during the season two or three times you will have a chaotic event, as we had in Budapest for example, and we have to be there this weekend. Let's see what could happen.

So you want a chaotic race here?
FV: As long as it's not chaotic for us, yes.

Can we talk drivers? You said a few races back that you were going to make a decision about Valtteri Bottas' team-mate for 2022 in September. We are now well into October. What's the latest, please?
FV: I didn't say which year of September, first! Seriously, we are not in a rush to take a decision. We have a couple of options on the table and we have to take time to decide but we are not in a rush. The situation won't change over the next couple of days and we will take a decision soon.

What is holding the decision up?
FV: Because we are discussing with all the parties involved and it's not an easy choice. We are at the beginning of the new regulation. It's a new journey for the F1 and we have to consider all the points. It would make sense for us to have a look on the last events of the F2, Monza and Sochi. OK, now the situation is like this and we will take a decision in the next couple of weeks most, probably.

Guenther, neither of your drivers has raced here in Turkey before. What are their first impressions of the track?
Guenther Steiner: I think it's just another new track for them, nothing too exciting for them. I mean, nothing more exciting than any other track, because there are quite a few they haven't raced on. They haven't raced on any of the tracks in an F1 car anyway. So, I think they quite like it. They don't like the car too much, there's a lot of understeer we have got in FP1, but otherwise I think they are pretty happy with the track and everything that's going on here.

You have made no secret this season that 2021 has been all about the 2022 car in terms of development co can you give us an update on how that project is coming on?
GS: And I wasn't wrong with that prediction, no? Yeah, the '22 car's development is going well. We are making progress each wind tunnel session. It's look a little bit like '15 or '16 to me, but to say how good we are, I have no idea, because I don't know how good the other nine teams are. But as a team we work now again like we did in '15, '16 and '17, the technical team in Italy, and I'm cautiously optimistic that we will be in the midfield again next year.

And are there any other aspects of the team that you need to develop and bolster ahead of next year as well?
GS: I think there are always... You could bolster everything, always. You can always do better but I think the other aspects of the team they are in good shape I would say, the race team is in good shape and there will be no big changes there, because they just took time this year to get them ready for next year as well. There is nothing big coming otherwise. I think we will be ready. There are still a lot of people from 2018 when we finished fifth in the championship, so these people are still good and they haven't forgotten how to do this. I rely on these people and I am confident they can pull it off again, that we have good result, maybe not fifth but at least being back in the midfield like were in '16 and '17.

Jost, coming to you; another strong weekend for the team in Russia. Are you at the point where you think this car can be competitive everywhere, for the remainder of the season?
JC: That's very difficult to say. It was really unpredictable so far in the season, when we went to tracks where we thought we are not competitive, we have been more competitive than we thought, not really highly competitive and it was the other way round as well, so we'll see and we'll look at every race separately and we'll do the best at every race weekend.

Now you've got seven races left with George Russell, but all the focus at the factory is on 2022. Are you starting to limit George's exposure to further development?
JC: It's not much involvement of the drivers for next year's development yet, so that is not a question we have really... it's not a question for us, so he's doing his job, preparing the races and preparing for the rest of the season.

Will George return to the factory? Is he still doing simulator sessions?
JC: Oh yeah, of course. There's nothing changed after the decision that he's at Mercedes next year.

And would you like to see Alex Albon as soon as possible fill that role and start getting involved?
JC: I think we have to be realistic. He is still working for Red Bull and that will be the case until the last race so we hope that after the last race we can start working with him.

(Scott Mitchell - The Race) Fred, you've mentioned that you wanted to have a bit more time to see what happens in F2. It seems like Monza and Sochi only strengthened Oscar Piastri's case. Does Oscar have a serious chance of being an Alfa Romeo race driver next season?
FV: Oscar is doing a very good job but he was very performant and consistent over the last weekend but as far as I know and I understand, he's linked with Renault... or Alpine.

(Dieter Rencken - Racing Lines) To all three team principals: as we head towards the last quarter of this year's championship, who do you think is World Champion? Who would your money be on?
JC: I think it's unpredictable and I don't make too much... I don't spend too much thinking of that because we've got other issues and problems. So, I don't care.

Are you enjoying the championship fight?
JC: Yeah, of course I'm enjoying it but if you are at the pit wall you are so much into what's going on with your cars, so sometimes at the end I have to ask who won?

GS: So the question from Dieter is who do I think will win the championship, yes? Max. Keep it short.

Are you going to give us any more as to why?
GS: No, because there's more points at the end, that is why. I don't know why. That's the answer: Max.

Do you think the Red Bull is the car to beat now?
GS: I said Max is the driver to beat.

Fred?
FV: Difficult to know. It's a very tight fight but I think one of the topics is also the reliability but we saw this morning Lewis will have to introduce a new engine, it will be a penalty and this could be a game-changer for the championship because they are so close. Every single small event could decide for the championship. But I would say Lewis, so it will be 1-1. If Guenther says Max, I have to say Lewis!