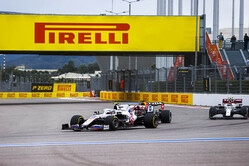 Mazepin took the start from 15th on Pirelli P Zero Yellow medium tires and leapt up to 13th on the opening lap. Mazepin battled with much faster cars but held a solid 16th through the first stint, coming in on lap 14 for White hard tires, emerging in 19th position. Mazepin came in again on lap 48 for Cinturato Green intermediate tires as a band of showers swept through Sochi Autodrom and he avoided the drama that befell others to collect 18th spot at the checkered flag.

Schumacher started from 14th on the grid, also on soft tires, but dropped to the rear of the field on a frantic opening lap. Schumacher regrouped and came in on lap 20, taking on hard tires, and closed on teammate Mazepin, making a move for 19th on lap 32. Unfortunately for Schumacher a hydraulic issue on his VF-21 meant he was forced to come into the pitlane to retire just two laps later, bringing his perfect finishing record this season to an end.

Uralkali Haas F1 Team will next be in action at the Turkish Grand Prix, to be held at Intercity Istanbul Park, from October 8 to 10.

Nikita Mazepin: "It was a long race - loads of things happening. I had a very good first opening lap and then did my best to hold the faster cars behind using the battery cleverly, which I think I did well. Then after we boxed, came out on hard tires, I still tried to keep the cars behind and obviously one overtook me, and then I had a lock-up and unfortunately for us when the hard tires lock-up, they don't ever come back. We as a team made a good call to go on to inters, I was one of the very first cars and gained quite a bit of time back. It was fun to overtake some cars that I would never be able to overtake. Nevertheless, we know where we stand and now eyes forward on to the next race."

Mick Schumacher: "We obviously had an issue and we were trying to fix it out on track but didn't manage. It is what it is, we live and we learn and it's Formula 1 - so things can happen. It's my first retirement this year and I was certainly hoping it would take some more time, or not happen at all this year but it's a part of the game. We were very good in terms of pace and the car felt really good out there. We'll take away the positives, analyze them and take them on to Turkey."

Guenther Steiner: "We had a good race start with both cars. Nikita in the first part of the race had good pace, keeping a few other cars behind. Mick's start was not fantastic, but he got out after his tire change and was very strong and then unfortunately he had a hydraulic issue, losing pressure. Nikita - once the blue flags started - the tires got cold and he struggled to keep the pace, that was the reason. In the end we got one car to the end and we come back."