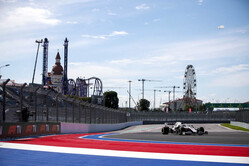 Round 15 of the 2021 FIA Formula 1 World Championship began with practice on Friday at Sochi Autodrom as teams prepared for Sunday's Russian Grand Prix.

FP1 saw Mazepin straight out on track running the Pirelli P Zero Yellow medium tires while Schumacher's wake-up run utilized the White hard compound. A six-lap baseline outing on the Red soft rubber followed for both drivers - producing their fastest laps of the session. Mazepin recorded a 1:38.586 for 19th on the timesheet with Schumacher setting a 1:38.977 for 20th overall. The morning session concluded with high fuel stints - Mazepin returning to his earlier medium set with Schumacher back on the hard rubber.

Armed with soft tires to start FP2, Schumacher set his fastest time of the session on his opening run. The German banked a 1:36.230 which he failed to better on his second set of softs. Mazepin dropped from a 1:37.125 lap on his first set of softs down to a best lap of 1:36.099 on his second qualifying sim - the Russian placing 19th with Schumacher 20th. The session was interrupted by a red flag stop caused by Alfa Romeo's Antonio Giovinazzi contacting the barriers at Turn 10 - the Italian unharmed in the incident. FP2 resumed with 16 minutes left on the clock - Mazepin and Schumacher latterly working on high fuel distance runs through to the checkered flag.

Nikita Mazepin: "I love Sochi and I think Sochi loves me because when we arrived here yesterday, I looked at the weather and it was saying it wasn't going to be very good, but there is nothing like Sochi sun. Especially with that track, it's fast and then it's flowing, during the whole lap it's very enjoyable to drive. I wasn't quite sure what the car was going to feel like, given the balance can be different, but the balance was very similar to what it was like last year in Sochi and although we're just missing overall downforce and lack pace, I think we're close to extracting what we had to. We completed our run plan for today and let's see what to expect tomorrow - I don't think we're going to get the sunshine like we had today."

Mick Schumacher: "Overall, I felt quite comfortable. This track isn't really driven over the year and that meant we had a very green track to start off with. I think in general we did some good things on the car, it felt comfortable early on, especially in FP2. Unfortunately, I didn't get to finish my lap on the second set but we know that we have it in our pocket. Overall, it's more about getting to know the car better on every track, especially here where I have good memories from F2, to convert that into a good run in F1 is positive. Now, it's just a matter of putting everything together."

Guenther Steiner: "A pretty good day today with no big issues and both drivers and the team doing a good job over the two sessions. We went out early in FP2 to try and get a lap in, should there be an issue with qualifying tomorrow. Apparently, it will be raining, but we don't know for sure, so we'll deal with that one tomorrow. We made sure today to get a lap in and everybody else did, so we ended up where we normally end up but all in all, a good day at the office."