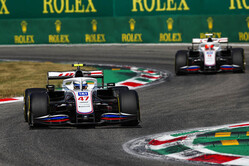 Schumacher took the start from 18th on Pirelli P Zero Yellow medium tires and made progress to move up to 15th place. Schumacher came in for White hard tires on lap 24 of the 53-lap encounter but lost out at the restart when contact was made with teammate Mazepin. Stewards deemed Mazepin culpable and issued a five-second time penalty. Schumacher recovered to greet the checkered flag in 15th.

Mazepin started from 16th on mediums though he conceded a spot on a frantic opening lap. He came in on lap 25 for Red soft tires but changed tact a couple of laps later when the Safety Car was deployed, switching to the hard rubber. After the collision with Schumacher a heavy lock up into the first chicane necessitated a third pit stop, with Mazepin taking on the soft compound once again on lap 40, but his race unfortunately came to a premature close a few laps later due to a power unit issue.

Up front McLaren ended a drought of 3,213 days to register victory courtesy of Daniel Ricciardo, with teammate Lando Norris completing a 1-2 for the team. Mercedes' Valtteri Bottas finished third from the back of the field.

Nikita Mazepin: "I had a power unit failure from what I believe - we just lost all power. I think it was dangerous for the whole unit to continue forwards and not be able to recover it completely, so the team said to stop the car immediately. With Mick, he braked very early going in to Turn 4 and I just put my nose there and obviously he needed to make the corner and turn in, so I'm sorry it happened. It was my fault, but it was a racing incident. It was obvious that I wasn't happy about it and that it happened. Later I had a flat spot and half a wing plate missing, we needed to box for a pit stop and then obviously the engine said goodbye."

Mick Schumacher: "Personally, I felt it was a good race. I feel we took the right decisions in terms of strategy and I feel the communication in the race was very good. In terms of race start, there was a lot happening in front and with the safety car things got interesting. We had a good restart this time and we were able to fight. Unfortunately, I got a bit of damage on the front wing, but in general we can be happy how we managed it today."

Guenther Steiner: "A pretty exciting race for us in all aspects with all that went on. Obviously, again we had a run-in between the two drivers but they cleared the air about it. What was said was said and they are good. We're making progress on that side and hopefully we can keep it like this. I think our two guys learned from the last races, now try to move on and try to take onboard the suggestions that we as a team give them and hopefully we have less of this coming in the future, even if today it happened. If you are clear about it, it's good, it's part of learning and fortunately the car was not badly damaged."