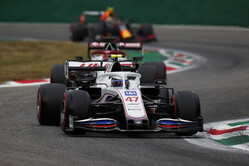 Uralkali Haas F1 Team drivers Mick Schumacher and Nikita Mazepin qualified 18th and 20th, respectively, for Saturday's second-ever 100km Sprint event - the result of which will then determine the grid for Sunday's Italian Grand Prix, Round 14 of the 2021 FIA Formula 1 World Championship hosted at the Autodromo Nazionale Monza, Italy.

Schumacher and Mazepin exited knockout qualifying on Friday after Q1 with only the top-15 drivers moving on to contest Q2. It was on their third and final set of Pirelli P Zero Red soft tires where both drivers set their best times. Schumacher lapped the ‘Temple of Speed' in 1:22.248 for 18th fastest with Mazepin 20th overall having recorded a personal best of 1:22.716.

Valtteri Bottas of Mercedes claimed pole for the Sprint tomorrow with a flying lap of 1:19.555 - the Finn .096 of a second faster than teammate and title protagonist Lewis Hamilton.

Prior to Friday qualifying Schumacher and Mazepin had just one 60-minute free practice session to bed in their VF-21s around the 5.793-kilometer (3.6-mile), 11-turn circuit. Both drivers worked their way through one set of mediums and two sets of softs with some baseline running and qualifying sims. Mazepin's fastest lap in FP1 was a 1:23.445 (P19) with Schumacher setting a best time of 1:23.551 (P20) - both drivers running the soft rubber.

Nikita Mazepin: "One more interesting, hectic qualifying session out there. I was happy to get a clean lap at the end, in terms of being able to start, as we were going very slow on the straight next to the last corner. I went off unfortunately on my fastest lap which cost me quite some time. We have two races ahead this weekend, the pace is looking very promising, so I'm excited."

Mick Schumacher: "It was getting kind of tight at the end of qualifying. It was good to have a good lap and be in front of one Alfa Romeo - that's an achievement for us. We're happy with what we achieved today. Looking forward to tomorrow, hopefully we have made the right changes in our car to be able to fight. What we learnt from Silverstone is that Sprint Qualifying is a bit different to the race in terms of degradation, so we'll probably have to attack and go in with a different mindset compared to the main race."

Guenther Steiner: "A pretty good day for us. As much as you can say it was uneventful, it was a good uneventful. We had a good test in FP1 with both cars, no issues at all, and then in qualifying we out qualified one of the Alfa Romeo's - a good success. Nikita got very near to that as well. All in all, tomorrow we start P18 and P20 and we look forward to Sprint Qualifying. Hopefully we can move up a little bit so we have better starting positions on Sunday."