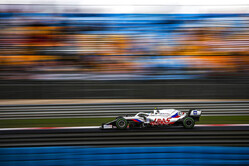 Nikita Mazepin exited qualifying in P20 after Q1 - the opening knockout round, while teammate Mick Schumacher progressed to Q2 courtesy of P14 in a frantic session. With the threat of rain imminent, little time was wasted and both Schumacher and Mazepin successfully ran three new sets of Pirelli P Zero Red soft tires in Q1.

Track conditions remained tricky after the earlier rain shower which blighted final practice. Schumacher set his best lap of 1:25.555 on his final tour - moving on to Q2 for the second time in his rookie year in P14. Mazepin's last lap was his quickest, a 1:28.449 to place 20th overall - however, the Russian will start P19 on the grid with Scuderia Ferrari's Carlos Sainz starting last following a grid penalty for a PU change.

Schumacher joined the top 15 competing in Q2, the German setting a fastest lap of 1:25.200 to secure P14 on the timesheets - equaling his highest grid start of the season from the Russian Grand Prix.

Nikita Mazepin: "I went out there and obviously the grip was good enough on most of the track for the slick tires but Turn 1 caught me out so we boxed from that set and then I wasn't really sure where to push, how to push. In these conditions I was caught out as we expected the rain to come so I had two laps to do, but obviously the rain didn't come. I needed to do a lap and I did a lap, but it wasn't good enough today."

Mick Schumacher: "Those tricky conditions were fun to drive, I enjoyed it and I think we as a team took the right decisions at the right time. We analyzed it properly, we went through all the steps we usually do and found the right set-up for the right conditions. It's gone well from FP1, it's been a nice feeling on track in the car so I'm happy. We got to drive, show our performance and I think maybe we even had a tenth or two in there. Tomorrow, hopefully we're able to keep the position or even be a bit further forward."

Guenther Steiner: "All in all, a good day for the team today with getting Mick into Q2 and participating in it, unlike last time where he couldn't. He shows with hard work - even if your car is not as good - you can still achieve results. Everyone did a great job, Mick driving and the team making no mistakes in a difficult situation with the rain coming and going, everything was done right. For Nikita, we tried our best but he just doesn't get along with Turn 1 here. When he was on a fast lap, his time was disallowed because of exceeding track limits in Turn 1 so he couldn't get a complete lap in. The team did a good job today and what more can you wish for at the moment."